Himmas Kassa: The Mother of all Hummus

The Oldest Documented Recipes for Hummus

A fourteenth-century recipe for Himmas Kassa (mashed/pounded chickpeas); for source, see caption below:

Translation of the Recipe:

Take chickpeas and after they boil, pound them finely with vinegar, olive oil, tahini (sesame paste), black pepper, atraf teeb (spice blend), mint, parsley, and dried thyme. Add [and continue pounding] shelled walnut, hazelnut, almond, and pistachio, as well as Ceylon cinnamon, toasted caraway seeds, coriander seeds, salt, lemon preserved in salt, and olives. Stir all to blend, and them spread [on a plate] and set aside overnight, and eat it. It will be wonderful, God willing.

This recipe and several variations on it occur in other cookbooks belonging to the same period. The following Himmas Kassa is from 13th-century Syrian cookbook Al-wusla ila'l-Habeed fi Wasf al-Tayyibat wa'l-Teeb (Winning the Beloved's Heart with Delectable Dishes and Perfumes) by famous historian Ibn al-'Adeem of Aleppo (d. 1262) , pp. 2:718-19. 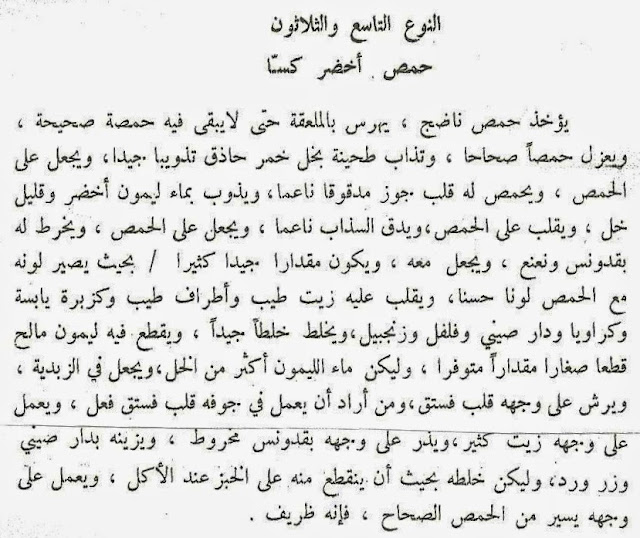 The recipe is more or less similar to the one quoted earlier, albeit with more details, especially important are the ones provided at the end of the recipe: After the hummus is spread, the recipe mentions that it should be drizzled with a lot of olive oil, with chopped parsley (baqdunis), sprinkled on it, along with chopped pistachio, cinnamon and crushed rose buds. Interestingly, the recipe suggests that the dish will look quite nice if some whole boiled chickpeas are also put on the top. Such details would surely make it look so much similar to the way hummus is traditionally garnished in our time, but of course minus the chili pepper, which came later to the region.

An important detail also tucked at the end of the recipe is about the dip's consistency: it has to hold its shape when picked up with a piece of bread. Like today, this food was offered as an appetizer: a cold dish -- a dip with bread -- to be consumed before the main hot dishes.

Eleven recipes are given, including one similar to the recipe quoted above, in the 14th-century anonymous Egyptian cookbook Kanz al-Fawa'id fi Tanwi' al-Mawa'id (Treasure Trove of Benefits and Variety at the Table). Here is one of them: 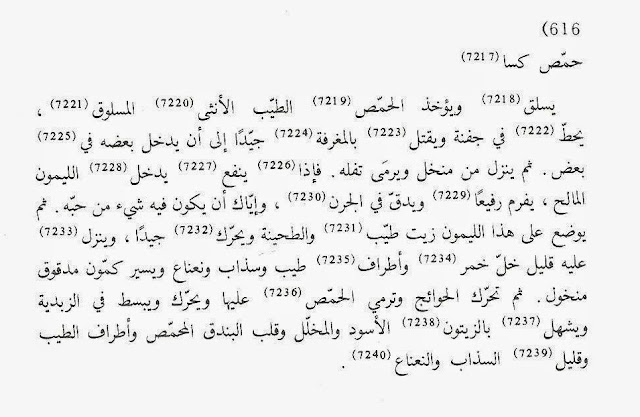 The recipe this time does not use nuts, but it is also garnished the same as the one above it: It is spread in a shallow bowl, and sprinkled with black olives, crushed toasted hazelnut, a bit of spices, rue, and mint.

(Makes 4 servings)
1 cup boiled chickpeas
2 tablespoons tahini, stirred with water and wine vinegar, 2 tablespoons of each
¼ cup finely ground walnut, stirred with 2 tablespoons lemon juice, and 1 teaspoon wine vinegar
½ cup chopped parsley
¼ cup chopped mint
3 tablespoons olive oil
¼ teaspoon of each of caraway, coriander, black pepper, ginger, and cinnamon, all crushed
½ teaspoon salt
A quarter of a salted lemon, cut into small pieces
For garnish: olive oil, chopped pistachio, chopped parsley, cinnamon, and rose petals (optional)
…………………………………
1. Put all the ingredients, except for the salted lemon, in a food processor, and pulse the mix until it looks smooth. The mix should look green. Add more of the herbs if needed. The consistency of the mix should be thick enough to pick up with a piece of bread. Add a bit more lemon juice if needed.

2. Fold in the chopped salted lemon, and use. To serve a dish, spread the condiment on a plate, drizzle a generous amount of olive oil all over its face, garnish it with chopped parsley, and give it a light sprinkle of cinnamon and crushed rose petals if used.

Unfortunately, after the 14th century, there was a long period of silence, until we approach the second half of the 19th century. A Lebanese cookbook entitled Kitab Tadhkirat al-Khwateen wa Ustadh al-Tabbakheen (The Mater Chef's Culinary Memento for Housewives) by Khaleel Sarkees (1885) contains a recipe called Hummus Mutabbal bi'l Zait: 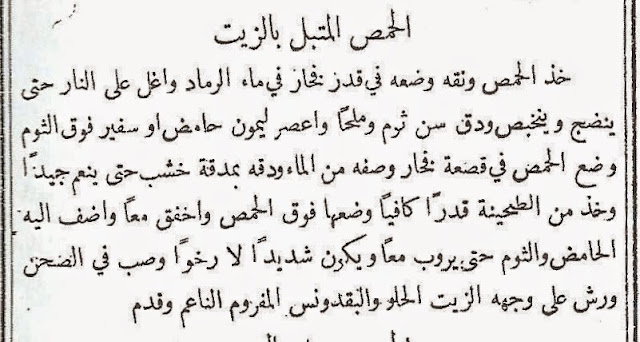 The recipe uses the basic ingredients that make up our traditional dip Hummus bi'Taheena: chickpeas, garlic, lemon juice, and tahini. The recipe specifies that it should not be runny in consistency, and that after it is spread on a plate it is sprinkled with sweet-tasting olive oil and finely chopped chervil/parsley.

The name itself, Hummus Mutabbal (حمص متبل), might be translated as spiced chickpeas, but since the recipe does not use any spices, I am more inclined to interpret mutabbal as 'ground', for indeed this is the original meaning of the Arabic word t-b-l (تبّل) 'to crush, to grind.'

The chickpeas are always pounded or mashed to make this particular dish. Besides, ground spice/spices are usually called tabil/ tawabil; and quite likely this could be the reason why tabboula/tabbouli was called so in the first place, since tabboula is not tabboula if it is not chopped finely. Indeed, the word can be traced all the way back to the ancient Mesopotamian times, when 'tabilu' meant 'ground' in the Akkadian language (Jean Bottero, The Oldest Cuisine in the World, p. 57).

In the Levant today, some cooks still call this appetizer by the name mutabbal hummus, and its 'cousin' made with eggplant, mutabbal badhinjan, instead of baba ghannouj, which confirm my hunch that mutabbal basically designates 'mashing and pounding'.

A Hummus bi Tahina Recipe, with a Bit of History:

They dug a pit in the sunlight.
Then Gilgamesh went up on the mountain.
He poured out his chickpeas into the pit.
"Oh, Mountain, grant (me) a dream…"
(Epic of Gilgamish, quoted in Martin Levey, Chemistry and Chemical Technology in Ancient Mesopotamia, p.50)

Both sesame (Akkadian 'samsamu') and chickpeas  (Akkadian 'amusu') were valued field cash products, grown in abundance in the entire ancient Fertile Crescent region. Sesame oil has always been an essential food item in their diet until recently. As for chickpeas, their nutritious value has always been acknowledged, as in the Epic of Gilgamesh, where it was chosen as one of the victuals he carried with him on his journeys.

In the medieval times, other potentialities were attributed to chickpeas such as aphrodisiac ones. It was believed to possess the three essential elements required to achieve this Viagra-effect. Food has to be hot in nature, it has to be nutritious and moist enough to increase sperm, and it has to have the power to generate enough wind to fill and stiffen the veins of the ‘equipment,’ as explained in the medieval Arabic books on dietetics and botany. 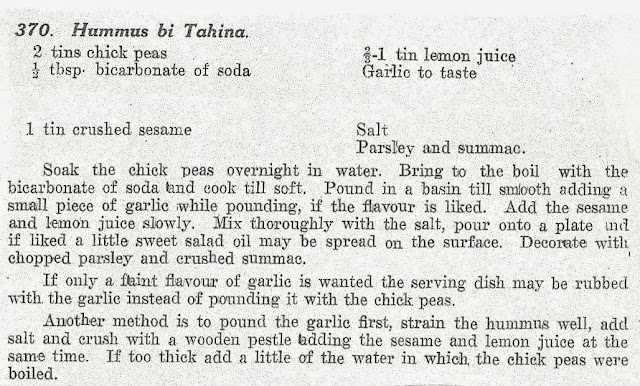 The above recipe from the first cookbook in the history of modern Iraq Recipes from Baghdad, 1946, is a basic hummus recipe for an appetizer, which seems to have already become the hallmark of the mainstream Middle Eastern-Arab cuisine.

Now to my recipe: Although hummus, fresh or canned, is readily available in stores, homemade variety is definitely tastier and cheaper. You may use whole chickpeas, which you soak and cook yourself. However, canned chickpeas can be very handy if you want to make hummus in just five minutes. For a smoother texture, use dried yellow split chickpeas (dried split peas will give similar taste, and they do not need to be soaked overnight).

1. Boil the chickpeas until tender, and then drain them, but reserve some of the liquid..

2. Put cooled down chickpeas or canned ones in a blender or food processor, and purée for a minute or two. If canned chickpeas look rather dry, add about ¼ cup water. Then add garlic, cumin if used, lemon juice, salt, and olive oil. Add tahini, and blend for a minute or two until mixture looks smooth, lighter in color, and of spreading consistency. If it looks rather dry, add a small amount of the reserved liquid or just plain cold water. Check for salt and lemon juice. Refrigerate at least one hour before serving.

3. Remedies for not so perfect hummus:
*If it is a little thick and heavy in texture, add some cold water or reserved chickpeas liquid, and adjust seasoning.

*If the consistency is good but it still needs more tartness, use a little of unsweetened lemonade powder.

*If the taste of chickpeas still overpowers, add a little more tahini, until you get a balanced taste. 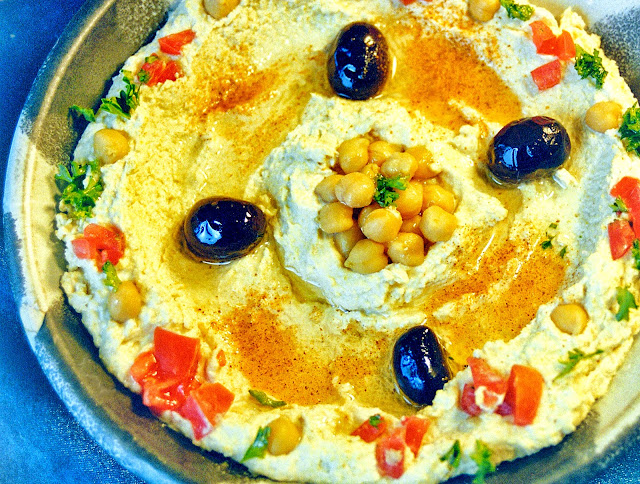