FEAST OF THE BIRDS

Sorry birds! It is us humans who are feasting, but you will be remembered in good health, I am sure.


Surprise your turkey this Thanksgiving and make it happy with a delicious aromatic stuffing ‘Iraqi style.' Besides the cavity, the bird is stuffed underneath the entire skin, as well. A bonus: The skin will come out scrumptiously crisp and flavorful. Worth trying!

I learnt this beautiful way of stuffing chicken from my friends in Mosul, in northern Iraq. I was invited to dinner, and there it was in the middle of the table an impressively plump bird, I thought it was a duck at first, and was quite amused to learn that it was just an ordinary chicken given the royal treatment.

Later on, I discovered, so much to my surprise, that stuffing chicken between the skin and the meat is not an entirely modern technique. In the 13th-century Andalusian cookbook Anwa’ al-Saydala (انواع الصيدلة في الوان الاطعمة), there is a chicken recipe called Al-dajaj al-‘Abbasi الدجاج العباسي (Abbasid chicken), which as the name indicates, is a loan dish from the medieval Baghdadi cuisine. The initial instruction in the recipe is to stuff the chicken between the skin and the meat, as well as the cavity (p. 23).

More details on this method are given in the 13th-century Syrian cookbook Al-Wusla ila'l-Habeeb الوصلة الى الحبيب في وصف الطيبات والطيب (by Ibn al-‘Adeem 2: 525--26). After the chicken is dipped in hot water and feathers removed, and before opening it up, the skin was separated from the meat by blowing very hard through the neck. For still undetached areas, a skewer was pushed through the neck, and the skin was carefully separated.


Here is the recipe. Amounts are for a small turkey or a large plump chicken:

1. To prepare the bird:
Wash it and rub it with vinegar and salt inside and out and let it stand for 30 minutes. Drain and dry. Then rub it with lemon juice. Mix the spices and rub them onto the bird inside and out, and then place it, bottom down, in a colander fitted on a bowl, at room temperature, until ready for stuffing.

2. In a large skillet, saute onion in the oil until transparent, about 5 minutes. Add garlic and turmeric in the last minute. Add peas, carrots, and mushrooms. Pour in about ¾ cup hot water and simmer on medium heat about 10 minutes, or until liquid evaporates. Mix in browned potatoes, raisins, almonds, garam masala (baharat), salt, cardamom, cinnamon, ginger, black pepper, and chili pepper.

3. Cook plain white rice until just done, the grains should still be firm and separated. Gently fold it with the vegetable mixture.

3. To stuff the bird:
Hold the bird with one hand and with the fingers of the other, starting with the neck part, separate skin from flesh, going down slowly all the way to the thighs, taking care not to pierce the skin with your nails. This will create a pocket to hold the stuffing.

Pat the cavities dry with white paper towels and fill the regular belly cavity very well with the stuffing (the rice is already cooked and would not expand). Sew the cavity closed. Then fill the pocket you have created with as much filling as it can hold, pushing the filling down to the thighs, the breast area, the wings, and the back. Sew the neck opening closed to prevent filling from coming out. Discard any filling that came into contact with the uncooked bird while filling it. 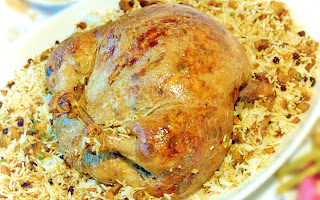 Place the prepared bird on a greased broiler pan and coat it with yogurt. Bake in the preheated oven for the first 15 minutes. Reduce heat to 350°F, and continue baking (allow 30 minutes for each pound). While bird is roasting, baste it occasionally with the dripping juices until it is nicely browned. Let it rest for about 15 minutes before carving. Remove threads and serve on a platter surrounded with any remaining stuffing. 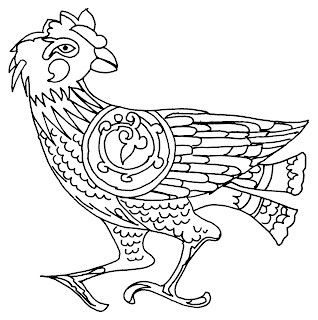