Crisp and golden bundles of delight:
Rice is boiled in a large amount of salted water, flavored with a bit of saffron, and cooked to perfection. Then it is drained and kneaded into dough, stuffed with spicy meat-mix, shaped, and fried to golden crispness. Yummy! 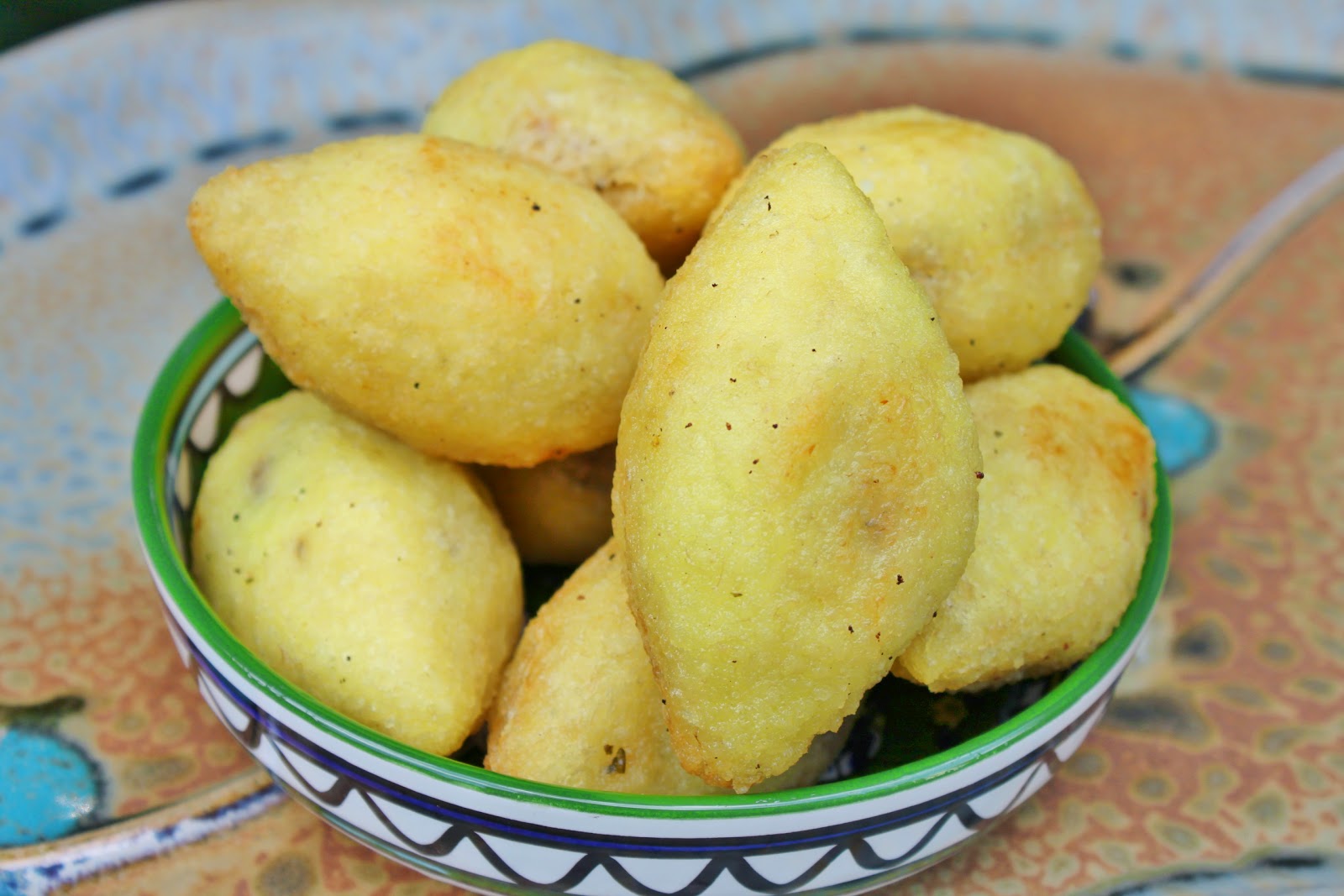 This is an Iraqi specialty, a delicacy usually reserved for festive treats and elegant presentations. Although the name kubbat Halab might link it to the Syrian city of Aleppo, to my knowledge, no other Arab country prepares it as we do. I once made it for friends from Aleppo, and they said they have never seen anything like it before.


The beginnings of today’s art of making the stuffed foods of kubba, of which this Iraqi specialty is just one kind, can be traced back to the Baghdadi medieval kitchens where cooks experimented with this sort of complex cooking technique, with great success. We know this from some of the recipes included in al-Baghdadi's cookbook كتاب الطبيخ written in Baghdad in 1226. In his collection of recipes, the much-loved meatballs, called kubeb كُبب (singular kubba كبّة), were given several playful twists by stuffing them with other ingredients, thus turning them into little balls of delightful surprises.

For instance, in a dish called Makhfiyya (the hidden), whole cooked egg-yolks were enclosed in spicy paste of ground meat, and shaped into balls. In Rutabiyya (meaning 'cooked with dates'), paste of ground meat was formed into date-like balls, stuffed with peeled almonds, and simmered in broth. When served, the dish was garnished with real dates filled with almonds, to further confuse the diners. In another dish called Bunduqiyya ('like hazelnuts'), paste of seasoned ground meat was shaped into small balls, as small as hazelnuts, filled with mashed cooked chickpeas, then simmered in broth.

Also included in al-Baghdadi’s cookbook was Naranjiyya (i.e. looking like naranj 'orange'). Meatballs were made as large as oranges, and then they were coated with egg-yolk and dipped into the stew-liquid several times until they acquired the color orange; which brings us to the now ubiquitous Sicilian arancini (singular arancino, from ‘arancia’ Italian for ‘little orange’), which are large stuffed balls of cooked rice, breaded and deep fried until they are golden brown, so that they look like oranges.

It is quite likely that the medieval Arab Naranjiyya might have been the inspiration behind this Sicilian specialty. Actually, I have seen it repeatedly mentioned that it was invented in the tenth-century during the time of the Arab rule, and that it was similar to foods based on recipes known in the Middle East during the Middle Ages (see for instance, Arancine, by Francesca Lombardo). Indeed, this might well have been the case as cultivation of rice, saffron and citrus fruits, among many other plants, was initiated by the Arabs when they ruled the southern parts of Spain and Italy. However, I have yet to find medieval recipes or more specific references to this kind of stuffed food.


It is my assumption, though, that arancini and even the Iraqi Kubbat Halab might well have originally been the creations of the resourceful cooks who found a practical and delicious way for using cooked-rice leftovers, but evidently the Iraqi cooks took it notches up. In today's Italian cuisine, arancini is plain honest easy-to prepare food, stuffed with whatever is on hand; quite popular as comfort snack food. 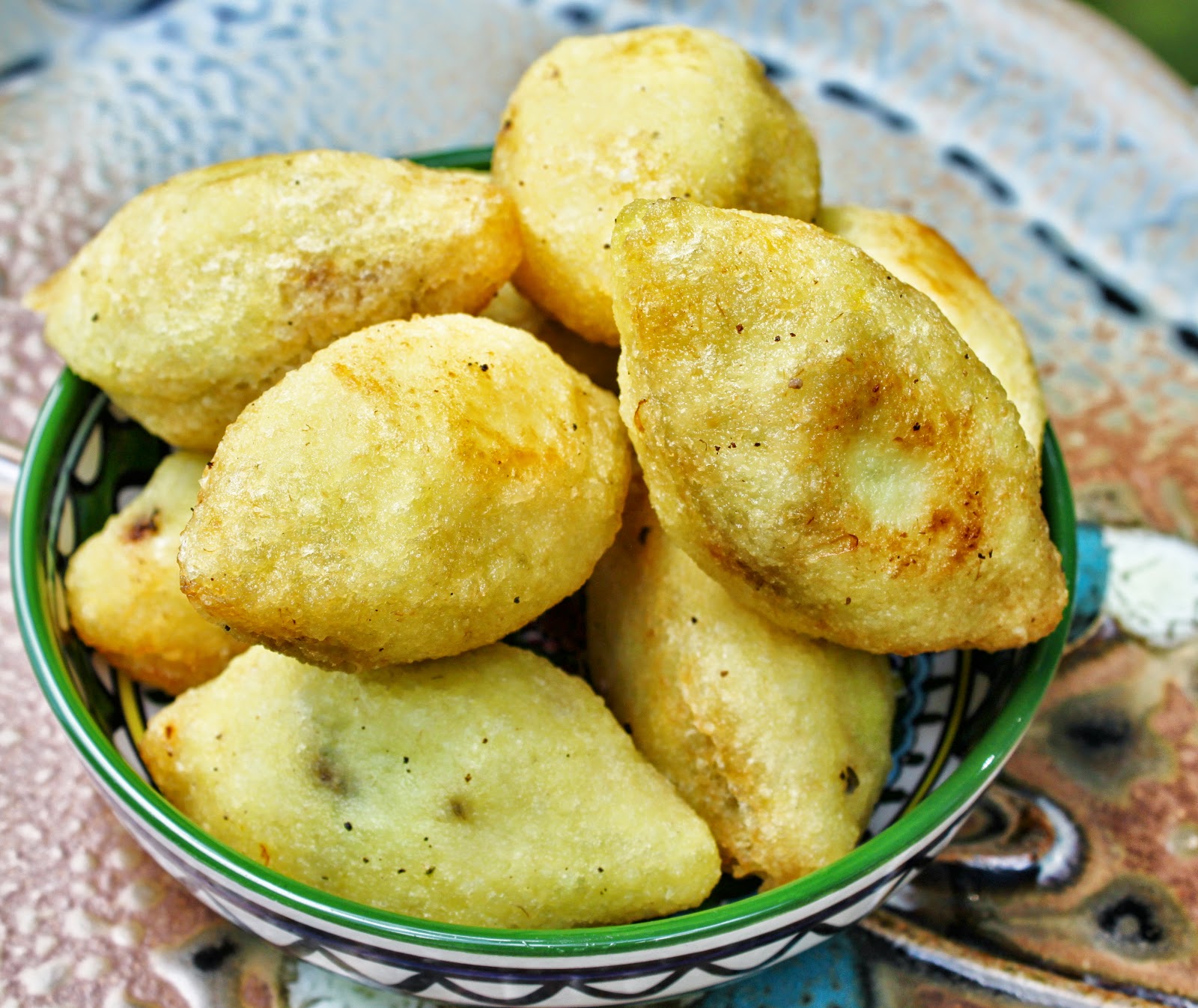 Kubbat Halab on the other hand is one of the most refined Iraqi stuffed dishes, which requires a certain level of expertise; shells meticulously shaped as thin as possible and exquisitely filled with meat stuffing, redolent with the aromas of allspice and baharat spices.

Here is how to make kubbat Halab:

Making dough for kubbat Halab might prove to be rather tricky at the beginning. I remember when I first started experimenting with it, the finished kubbas were soft, and took some odd shapes. To make successful kubbat Halab you need to watch for two things:

1. The best rice choice would be a variety which tends to be a little on the sticky side such as jasmine rice, but basmati rice will still work. Some people choose to add beaten egg to the dough as a binder, but this will soften the texture, and the kubba loses its characteristic crunchiness.

First of all, prepare the filling:

Heat oil in a big skillet and cook ground meat, stirring occasionally, and breaking down any lumps with the back of a spoon. When moisture almost evaporates, add onion and stir until transparent, 10 to 15 minutes, total. Add the rest of the ingredients in the last five minutes of cooking, and fold gently. Set aside to cool off.

1. Bring water to a boil in a medium pot. Add the drained rice along with salt, saffron or turmeric, and cinnamon. Give the pot a good stir, and bring it back to a boil. Reduce heat to medium, and let the rice boil gently in the partially covered pot, gently stirring twice or thrice. The rice grains should be cooked in about 15 minutes. Start testing after the first 10 minutes of cooking. Take a few grains and eat them, they should be cooked but still intact, not chewy, and not mushy. Do not let rice overcook.

2. Strain rice in a metal colander. Put the colander with the rice back into the pot and cover it with the lid, and set it aside until it is cool enough to handle.

3. Transfer rice to a big bowl, and discard the cinnamon stick if used. Sprinkle cornstarch on rice and knead with slightly moistened hands until mixture is combined into dough.

4. Have a bowl of cold water nearby. Handling with slightly moistened hands, take a small amount of dough, size of a small lemon, and shape it as follows (like the American football or rugby ball):

Hold the ball of dough in one hand and hollow it with the thumb of the other hand until you get an elongated oval shell about ¼ in. thick and 3 in. long, it does not have to be perfect. Fill and close the opening, and roll it gently between the palms to make it look like an egg with two pointed ends. Moisten your fingers whenever dough feels sticky. Put the finished ones on a big tray in one layer.

5. Fry the filled kubba in 1-inch deep hot oil, turning once, until golden all around, about 7 minutes per batch. Put the fried pieces in a large colander lined with white paper towels, and let them cool off a little before serving. Alternatively, you may spread the paper towels on a rack and put the fried kubbas in one layer to cool off. This way you prevent the kubba from getting soggy.

Serve with lots of salad and bread, or make into sandwiches with slices of salad vegetables, and pickles. Pickled mango (‘amba) with diced tomato is especially good with this dish (see my website for pickle suggestions).

When are we going to see such trailers serving the scrumptious Iraqi elegant version, kubbat Halab?

Posted by Nawal Nasrallah at 12:19 AM