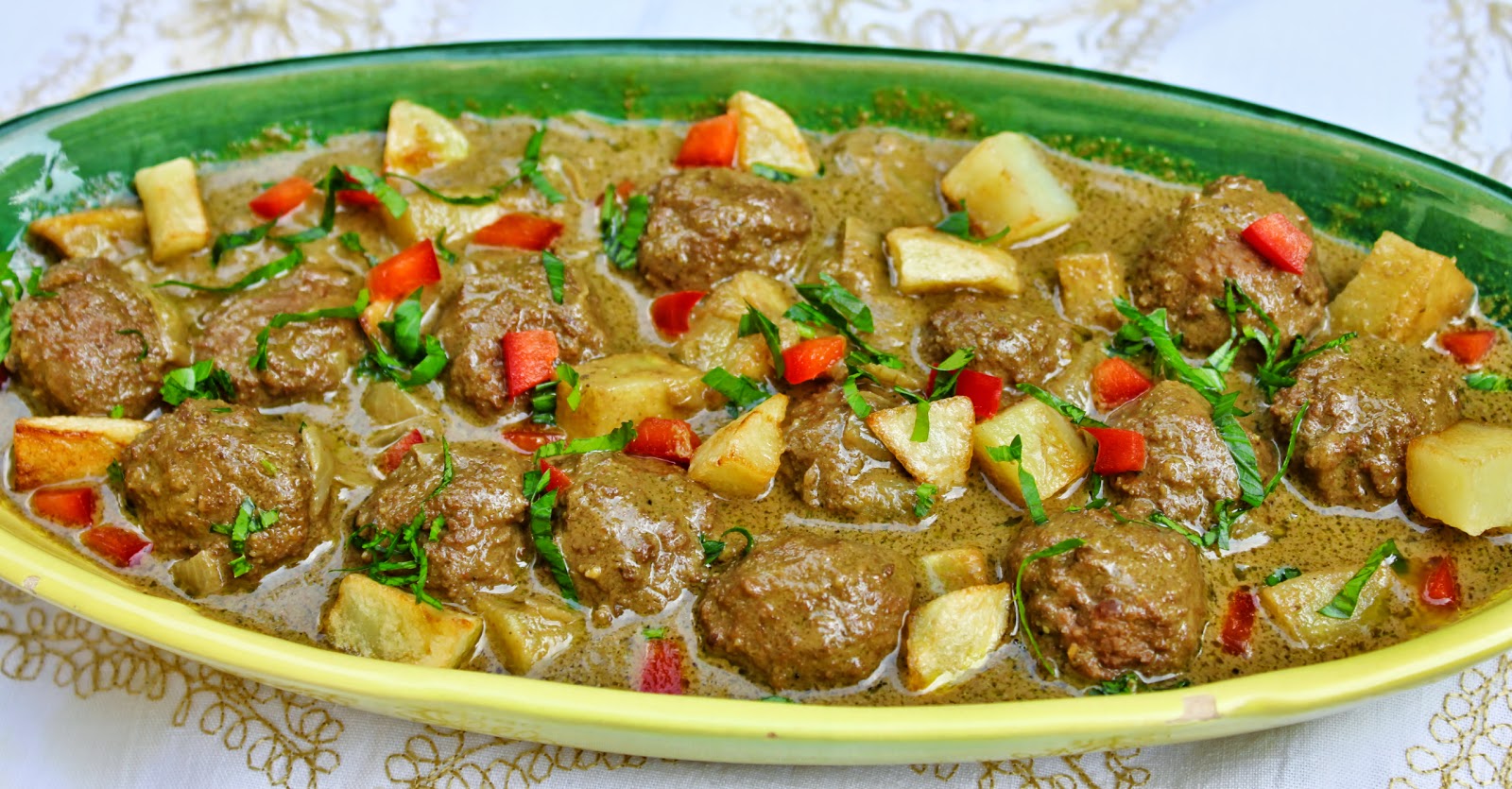 Nowadays in Iraq and Iran, similar dishes are more generally known by the Iranian name fasanjoun (فسنجون). Quite likely, the dish in Iran was originally named after Fisinjan, a Persian town, but this does not mean that it was an exclusively Iranian invention. Aside from the name, the dish itself -- meat of some sort simmered in sweet and sour pomegranate sauce and thickened with crushed nuts -- was a well established way of cooking in the entire medieval Islamic world. It was known as rummaniyya, after the fruit rumman (pomegranate), and we are fortunate to have a variety of such recipes, which were included in the extant medieval Arabic Baghdadi and Egyptian cookbooks.

Here is one of the recipes I found in the anonymous 14th-century cookbook Kanz al-Fawa'id (recipe no. 10, p. 15), which is also included in one of the copies of al-Baghdadi's 13th-century Kitab al-Tabeekh (British Library Manuscript, fol. 16 r, see image below):

Cut pieces of meat are added to the pot with water. When the pot comes to a boil, the scum is removed, and meatballs of pounded meat, made as small as hazelnuts, are added. Use a small amount of liquid in the pot, so that when it is all done nothing remains but a little bit of a nice rich sauce.
Next, sour pomegranate juice is balanced with rose petal jam made with sugar, and is added to the pot along with some mint leaves. Pistachio is pounded to thicken the stew, a bit of saffron is added for color, and all the spices used in aṭraf al-teeb [medieval spice blend].The pot is sprinkled with some rosewater and saffron, and then it is taken away from the fire.

The small meatballs used in the recipe above were commonly known as bunduqiyyat (each made as small as a bunduqa 'hazelnut'). It is interesting to see how these small medieval meatballs found their way westwards to Spain and later on to Mexico and South America and retained their original name-- Spanish albondiga, whereas in the Middle East today, they are generally known as kufta/kefta/kafta etc., and in Iraq, sparrows' heads (ras il-'asfour). Interesting how things might change, and yet do not change!

Rummaniyya, in one of its medieval versions, survived in the Levantine cuisine, especially in Palestine, cooked with eggplant, and instead of the nuts, thickened with a bit of tahini.

Here is my recipe: (Makes 4 servings)

12 ounces diced potatoes, lightly browned in some oil or brushed with oil and baked or broiled

1. To make meatballs: Combine all the meatball ingredients and knead lightly. With wet fingers, form into small balls (as small as sparrows heads). Shallow-fry them, or arrange them in one layer on a greased baking sheet, and broil or bake in a preheated oven 400°F. Turn pieces to brown on all sides, about 10 minutes. Set aside.

2. In a medium pot, fry onion in oil until transparent, about 5 minutes. Add turmeric and pulverized walnut and stir for about a minute. Add the meatballs, as well as the rest of the sauce ingredients. Stir gently, bring to a quick boil, and then reduce heat and let simmer gently for about 30 minutes, or until sauce is nicely thickened.

3. Ladle into a deepish plate and garnish with chopped parsley and pomegranate seeds when in season; otherwise, chopped red pepper will be equally nice.

Posted by Nawal Nasrallah at 8:28 AM No comments: