Gourmand World Cookbooks Awards 2007, for Delights from the Garden of Eden, and Annals of the Caliphs' Kitchens:

The ceremonies were held in London in April 2008, but I could not attend in person, due to visa matters. Janet Joyce owner of Equinox Publishing accepted the awards on my behalf, thanks to her: Annals of the Caliphs' Kitchens got Honorable Mention in the Arab American Book Award, arranged by the Arab American National Museum in Dearborn, Michigan. Once again, so much to my disappointment I was unable to attend the ceremonies in person. On the day of my flight, I woke up with severe flu symptoms. They mailed me some very nice goodies, one of them was this custom-made tile. 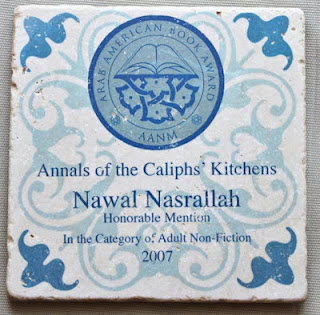