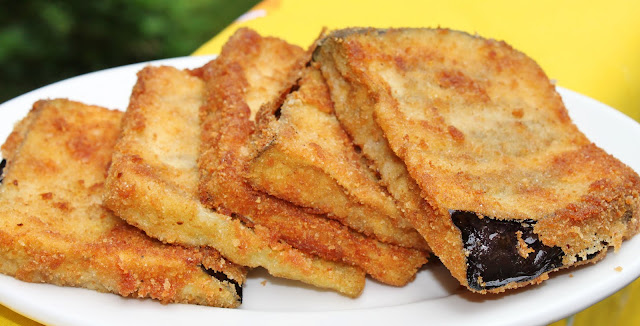 Eggplant makes easy but bewitchingly scrumptious sandwiches. They are quite popular in Iraq, eaten especially at dinnertime, the time for the smaller meal of the day (for lunch, more serious stuff is offered). Interestingly, Iraqi Jews used to eat it for the Sabbath morning meal, and they simply called it laffa (wrap sandwich), and they are the ones credited for making it a popular sandwich in Israel today, where it is more popularly known as sabich (but see a reader's comment below).

Sabich, the name, is most probably derived from the word subuh 'morning', which hearkens to the old times of Baghdad when the sandwich was a Sabbath morning staple. (Have a look at Vered Guttman's interesting article)

To prepare laffat batinjan, piping-hot fried slices of eggplant with slices of tomatoes and pickles (especially amba 'pickled mango') are wrapped in the tannour-baked flat bread khubuz). Laffa, lit. a wrap, eventually gave its name to all types of sandwiches, wrapped and otherwise, such as when sammoon bread is used instead, by slashing it open and stuffing it.


A Bit of History:
It is believed that the Eggplant has been growing in the Mesopotamian region since ancient times. According to the Assyriologist Jean Bottero, author of The Oldest Cuisine in the World, eggplant was one of the items offered to guests of the most famous feast held by the Assyrian King Ashurnasirpal II in the ninth century BC (p. 103).

Besides, in a monograph on the Assyrian vegetable drugs The Assyrian Herbal, based on 600 Assyrian cuneiform tablets, Campbell Thompson, the translator of these ancient Akkadian documents, is of the opinion that the plant pi(l)lu perhaps refers to Solanum Melengena L, eggplant. Pillu, at that time, he says, was also used to designate 'egg' and the mandrake fruit, which itself belongs to the same family as that of the eggplant. It is the
nightshade (Solanaceae), a family of dubious history.


The mandrake itself has long been associated with witchcraft and magic rituals and potions. It was mentioned as a ‘love plant’ in the Bible (Genesis and Songs of Songs).

In classical Arabic, the word luffah (لفّاح) designated both the eggplant and the mandrake. Medieval Arabic sources also called the eggplant badhinjan, a name we still use today. It is said to have originally been beidh al-jinn بيض الجن), that is 'eggs of demons', which may be linked to the ancient Assyrian name pillu 'egg', mentioned above.

In the medieval Arab-Islamic world, the eggplant was the least favorite vegetable among their physicians, who unanimously condemned eating it, and the bitterness of the vegetable has a lot to do with this. It was said to generate black bile, cancer, melasma (kalaf), and blockages.

But people ate it and loved it anyway. To gastronomes, it was the most acclaimed and inspiring vegetable. Medieval cookbooks offer a generous number of sumptuous eggplant dishes, the most famous of which were Buraniyyat named after Buran (d. 884), wife of Abbasid Caliph al-Ma’moun. Poetically, it was pictured as a black pigeon nesting in a vibrantly green orchard, with its emerald beak picking up sesame seeds and entrusting them in their ambergris gizzards.

Here are some verses by the famous tenth-century Abbasid gourmet poet Kushajim (in Kitab al-Tabeekh by al-Warraq, Chapter 45, my translation):

Eggplant has a taste like saliva a generous lover offers.
A pearl in a black gown, with an emerald set on it, from which a stem extends.
In taste, ‘tis like no other, whether hurriedly cooked or done well.
Yearning for this little wonder, the witty in hosts hasten to it.
Fools only have no appetite for it. As for the smart, they just love it.

To lessen the harms of eggplant, the medieval physician al-Razi (d. 923) for instance, recommended parboiling it before incorporating it into the dishes, as this would get rid of most of its harmful stuff. The best way for cooking it after this initial step was frying it in light oils such as almond oil or sesame oil. He also recommended peeling and slashing the eggplant then stuffing it with salt and soaking it in cold water for a while, before using it. Grilling was not recommended because it would not rid the eggplant of its bitter, hot, and sharp taste. This explains the absence of recipes for grilled eggplant in extant medieval sources. The closest recipe we have to our modern baba ghannouj was a 13th-century Buran dish, in which fried eggplant was mashed and mixed with garlic, coriander seeds, salt, and yogurt (in Kitab al-Tabeekh by al-Baghdadi).

In Iraq today eggplant is a summer crop, which though quite popular, is still maligned, such as when people lose their temper, they put the blame on eating eggplant; or cautioning distressed people against eating it; otherwise it will cause hives.

But see this article for modern day views on eggplants (and more recipes).


Here is how to prepare the eggplant to make sandwiches with it:

Eggplant slices simply fried in oil can get quite oily. To prevent them from soaking up oil like a sponge, sprinkle the slices with a little flour before frying them as this will help block most of the pores. Our medieval ancestors used to do the same thing.
1 large eggplant (about 1½ lb)
About ¾ cup flour for coating
Oil for frying

1. Cut off stem of eggplant, and peel it lengthwise to give it a striped look. Cut it into 2 parts crosswise, and then cut each part into ¼ in-thick slices lengthwise.

2. Soak pieces in salted warm water and top with a plate to keep them submerged. Set aside for 30 minutes. Soaking the eggplant in this way will prevent it from absorbing lots of oil while frying.

3. Drain eggplant pieces, and coat them with flour on all sides. Fry pieces in ½ in-deep oil until golden brown, turning once,  about 7 minutes. Drain on a rack or in a colander to prevent fried pieces from getting soggy.

4.  Brown tomato slices in a small amount of oil. Or use them raw.

5. Arrange eggplant pieces on a big platter in one layer. Arrange tomato slices on top. Sprinkle them with garlic, chili pepper, parsley, and lemon juice or vinegar. Dot with drained yogurt if wished.

Serve the arranged platter as a side dish by itself, or make into sandwiches by filling a piece of bread with some of the layered vegetables. 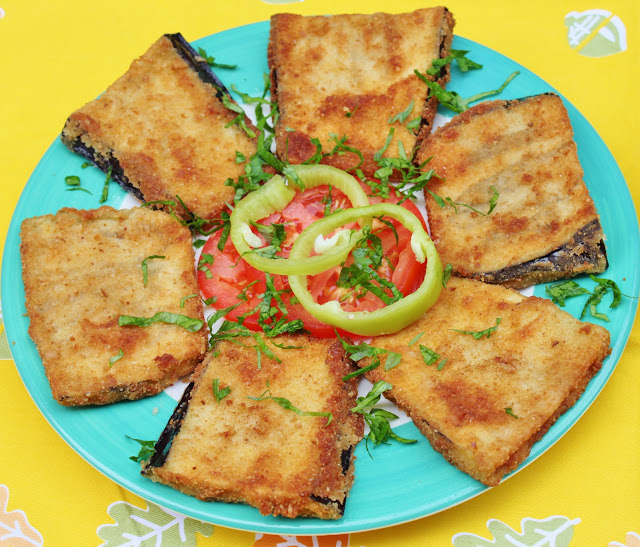 As in the previous recipe, this way of preparing and frying the eggplant yields crispy pieces, with the minimum amount of oil absorbed. In the 13th-century Andalusian cookbook Anwa’ al-Saydala (p.145), slices of eggplant were parboiled in salted water first, left to drain, and then dipped in a batter composed of white flour, eggs, black pepper, coriander, saffron, and a small amount of murri (fermented sauce, similar to soy sauce); and fried

Oil for frying
For garnish:
¼ cup parsley chopped
1 medium tomato, thinly sliced
Fresh hot chilies, or any kind of pepper
1. Cut off stem of eggplant, and peel it lengthwise to give it a striped look. Cut it into 2 parts crosswise, and then cut each part into ¼ in-thick slices lengthwise.

2. Soak pieces in salted warm water and top with a plate to keep them submerged. Set aside for 30 minutes.

3. Drain eggplant pieces, and dip each in beaten eggs, then coat with seasoned breadcrumbs. When both sides are well coated, press each piece down against the crumbs in the plate with your palm, and then turn it and press down on the other side.

4. Fry pieces in ½ in-deep oil on high to medium-high heat until golden brown, turning only once, about 5 minutes. Drain fried pieces on a rack or a colander to keep them crisp.

5. Arrange pieces on a platter, garnished with parsley, sliced tomato, and pepper slices. Serve as a side dish or make into sandwiches, as described above. 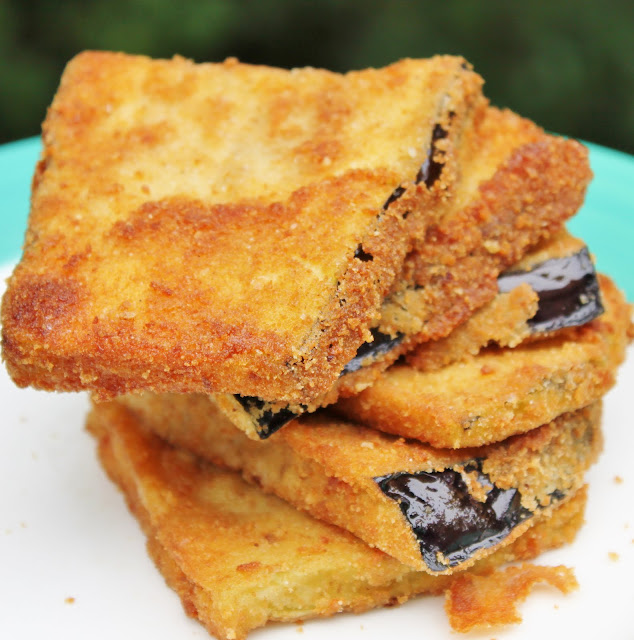 Posted by Nawal Nasrallah at 5:26 PM No comments: