A Song to an Unhappy Little Girl from Basra:

'Tis the season for pomegranate, so enjoy its fresh addictive succulent crunchiness while you may.

A lot of praise has been heaped on pomegranate in the West of late, touting it as an almost miracle food. But in the Middle East its virtues, both nutritional and symbolic, were acknowledged from ancient times. Read here, for instance, for more.

Thrice mentioned in the Qur'an, pomegranate is believed to have been grown in the gardens of Paradise. According to the Islamic lore, when the Prophet was asked about it, he said, "There is no pomegranate which has not within it a seed of the pomegranate of Paradise."


From ancient times, people in the Middle East have been preserving pomegranate to use when not in season. The seeds were dried whole and stored. For cooking purposes, the juice is cooked down to rubb (رُبّ), called molasses or syrup in English. A recipe from 10th-century Baghdadi cookbook by Ibn Sayyar al-Warraq describes how to make it:

Choose ripe sweet-and-sour pomegranate with red seeds. Extract and strain the juice and put it in a clean soapstone pot. Boil it on slow fire until it is reduced to a third of its original amount then strain it and store it in glass jars. (my translation, Annals of the Caliphs' Kitchens, p. 490) 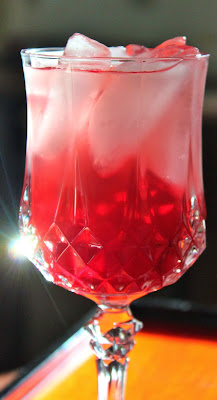 However, to enjoy it as a sweet refreshing drink, called sherbet in Iraq, pomegranate juice is usually preserved as a syrup, to be diluted with chilled water whenever needed.

This sherbet is not to be confused with the Western ice cream 'sherbet', although basically the latter did originate from this Middle Eastern drink (see for instance Jeri Quinzio's Of Sugar and Snow: A History of Ice Cream Making, pp. 6-7). Back in medieval times, such sweet chilled drinks were served at the end of the meal as they were believed to aid digestion.

In Iraqi this is how the syrup is traditionally prepared. It is usually diluted with chilled water and some ice cubes, but using plain soda would be nice, too. The syrup is not cooked down like the molasses, which helps preserve the fresh delicate taste of the pomegranate.

Use a juicer to extract the juice from pomegranate seeds (discard rind and membranes before juicing, to prevent the drink from getting bitter and acrid).

Gradually stir in sugar into the juice, and let it dissolve completely. Then add lemon juice and mix well. Bottle the syrup and seal it with wax, or just keep it in the refrigerator.

To serve, dilute the required amount with cold water, along with ice cubes or crushed ice. 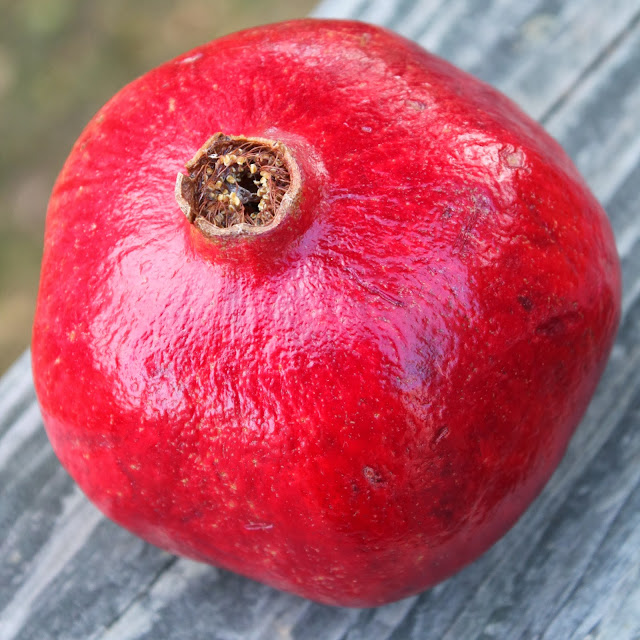 Pomegranate is mentioned in many Iraqi folk-songs. Check out, for instance, this coyish one:

When pomegranates hovered around me,
Lemons came to my rescue.
O that sweet one, I do not want him.
Take me back home.

Amorous depiction of the pomegranate in songs is an age-old tradition in the Middle East. Listen, for instance to one of the Songs of Solomon (7:12):

Let us go early to the vineyards to see if the vines have budded,
If their blossoms have opened, and if the pomegranates are in bloom.
There I will give you my love.

But pomegranate is also used as a term of endearment, as in this charming children's song, which highlights the precious love a father has for his daughter. Its origin is the southern port city of Basra, where the medieval Arabian Nights's famous seafarer Sindbad used to embark on his fascinating voyages. The Arab sailors' 'Hela' is the equivalent of the English sailors' 'Hey Ho'. 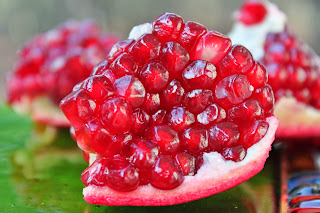 
I have a fried who, in celebration of her birthday asked for a song, just a song. My husband and I sang for her a traditional Iraqi song, a favorite of ours, but now I think I really should have chosen this one for her.

She once reminisced to us how when just a little girl, she used to slice canned pitted olives and wear them as rings on her tiny little fingers. Then she would proceed on nibbling at them one after the other until they were all gone. In my mind, she will for ever be that little girl.

So here's to you Michal! 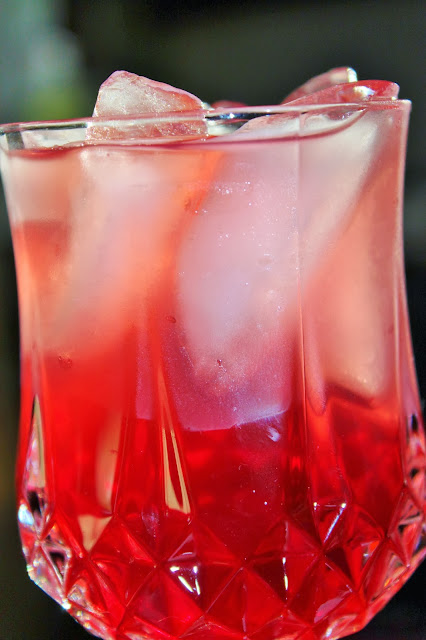 Posted by Nawal Nasrallah at 7:55 PM No comments:

Warm Memories of Summer in a Jam Jar of Cantaloupe:

A bowlful of aromatic succulent sunshine for a gloomy wintry day. 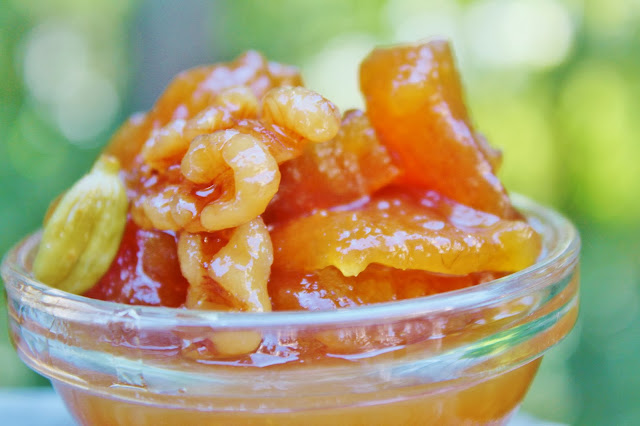 In Iraq this jam is exclusively homemade, and I am not aware that it is made anywhere else. People start making it towards the end of summer while the sun has not lost its intensity yet. After the jam is done boiling, it is usually taken up to the flat roof of the house, and is spread in kind of large shallow containers. A cover of thin muslin cloth is used to keep the jam clean from dust and flies. After a week or so under the heat of the sum the jam will thicken, with syrup like honey and chunks of preserved fruit delightfully sweet and chewy. Like this, the jam will keep for a very long time even without refrigeration.

The following recipe does not require the jam to mature on the roof top, which is good news, but make sure the cantaloupe pulp is firm and not on the mushy side, so that the fruit stays chunky.
1 pound cataloupe pulp
1½ cups granulated sugar
¼ cup walnut halves
3 cardamom pods
1 tablespoon lemon juice

Cut cantaloupe into chunks, layer with sugar and walnut in a heavy medium pot, add the cardamom pods, and set aside overnight.

Cook on medium-low heat, stirring gently to let sugar dissolve completely, skim as needed. Let jam boil gently until syrup is thick and cantaloupe is translucent, about 30 minutes. Add lemon juice in the last 5 minutes. Test for doneness by putting a drop of the syrup on a dry and cold dish. If you tilt the dish and the drop does not go flat but keeps its domed shape, then jam is ready. Let it cool off completely, and put in a jar. Refrigerate and use as needed. 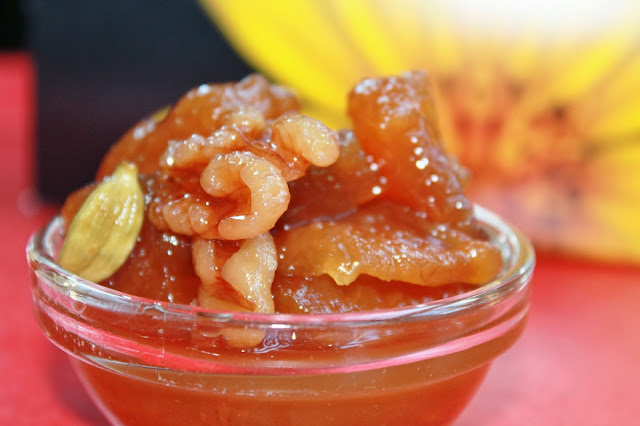 Posted by Nawal Nasrallah at 10:19 PM No comments: