The date palm is the national tree of Iraq, and that is for a good reason: it was there on the land of ancient Mesopotamia that this tree was first cultivated and flourished about seven thousand years ago. From there this beautiful and generous tree spread to the rest of the Middle East. It nourished and protected the poor, enriched the fine pastries of the rich, and inspired the people’s spiritual and religious rites. Every single part of the tree, fruit and all, was used. An ancient Babylonian hymn singing its praises, tells of the 360 uses of the date palm. It was that perfect!

But the date is of course the most important part of the tree, and in the Islamic Arab lore, it is a privileged food. The Prophet himself recommended having seven dates a day, as this was believed to guard against poison and witchcraft all day long. According to the Qur’anic verses describing the birth of Christ, Mary nourished herself with the dates falling from the palm underneath of which she went through labor. During the fasting month of Ramadan, Muslims break their fast at sunset by first having a few dates following the tradition of the Prophet, as this is believed to provide the much needed nourishment fast.

The date is almost a miracle food: According to recent scientific research, dates have heart-friendly antioxidants, which can also prevent certain kinds of cancer. Dates are believed to allay anxiety and nervous disorders in children. How to do it: Just let your kid eat seven dates a day. Easy. Want to treat alcoholism? No problem:  Twice a day and for a whole month, drink the liquid in which a few dates have been steeped for a couple of hours. This is believed to weaken the urge for alcohol. Going through a bout of low libido? Not to worry. Eat half a pound of dates or cook “Cupid’s omelet.” 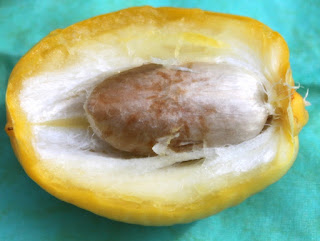 Want to eat something for sheer joy? Nibble on five or six dates, fresh or dried, or make them into a delicious confection, which Iraqis have been making for many many centuries.

This confection is called madgooga (literally ‘the pounded’) as it was traditionally made of equal amounts of dry dates and walnut or rashi/tahini (sesame paste) pounded into paste with a mortar and pestle for a long time, nowadays conveniently replaced with the food processor. The dates Iraqis use for this sort of candy is a dry date called tamur ashrasi. This variety is hard to find outside the country, but you may substitute with any kind of dry dates, or even the regular dried dates, as you will see in the following two recipes:

1. For this version, I use ‘date sugar crystals’ purchased from Shields Date Garden in southern California (link: Shields Date Garden). This stuff is 100 per cent dry dates crushed into granules. To make a small amount, put ½ cup ‘date sugar crystals’ and ½ cup walnut in a food processor. Pulse the ingredients until they form into paste. A few drops of water or tahini may help the mix bind faster, and make the resulting madgooga less crumbly in texture. Spread the candy in a small plate, in one-inch-thick layer, and sprinkle generously with coarsely crushed pistachio, or any nuts of your choice.

2. If you only have the regular dried dates, then follow this method:
½ cup flour
2 cups pitted dates
½ cup tahini/sesame paste

Dry toast the flour by putting it in a heavy skillet and stirring it constantly until it starts to change color and emits a pleasant fragrance, about 5 minutes on medium heat. Let it cool down a little.

Then, in a food processor, put the toasted flour along with dates, tahini, cardamom, aniseeds, and coriander. Process until mixture forms a ball, about 2 minutes. Divide the date paste into two portions. Press one half onto a flat plate forming a 7 inch disc. Arrange the toasted nuts all over the surface, and cover with the other half. Press the surface, and sprinkle it with the pistachio.

All you need know about the date palm and its fruit, the history, the culture, the myths, the legends, and of course recipes including ‘Cupid’s Omelet,’ and much more, you will find in my latest book Dates: A Global History (Edible Series, published by Reaktion Books, London, 2011. In USA, distributed by Chicago University Press). You can order it from your local bookstore or on-line. 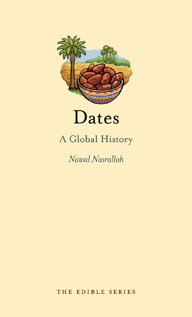