May your days be as sweet and luscious as Halawat Sha'riyya!

Sha’riyya (also called sha'eeriyya in some Arab countries) is wheat-noodles, similar to angel hair pasta. It is mostly sold in form of balls (also called ‘nests’, see photo below), available at Middle Eastern stores (sometimes labelled ‘thin noodles #1’). For savory dishes, we break it and drop it into soup pots as a thickening agent, or fry it and let it steam with rice, as garnish. And in this enticing dessert of halawat sha'riyya, where it is the main ingredient, we keep the strands relatively long.

Making thin noodles has a long history in the the Middle East. In the eastern and the western parts of the medieval Islamic world, many types of pasta, dried and fresh, were already familiar foods, the most prevalent  of which were itriya and rishta.


Itriya (إطرية) was described as thin strings of noodles made with stiff unfermented dough (fateer). References to it in cookbooks reveal that it was usually available as dried pasta. We are lucky to have a recipe for making it in the 13th-century Andalusian cookbook Fidhalat al-Khiwan: Semolina or regular flour was made into stiff dough with water and a little salt, and then rolled out thinly on a rectangular board. It was then cut into thin strings, and each string was rolled between the palms as thinly as possible. These strings were left to dry out in the sun (al-Tujeebi, p 91). As for rishta (رشتة), according to the 10th-century physician Ibn Sina, it was the Persian name for itriya, called so because it looked like fine strings. Other sources; however, do point to the fact that whereas itriya was dried noodles, rishta was used fresh.

Whether fresh or dried, these noodles were incorporated into the medieval stews, soups, or eaten as a main hot dish cooked with meat, as we do with pasta nowadays. We also have recipes for cooking them as sweet thick puddings with milk and butter, and sweetened with honey. These sweets came under the category of muhallabiyyat, as in al-Warraq's 10th- century cookbook Kitab al-Tabeekh (Chapter 98). In this book, we also have documented the earliest recipe for a noodle dish. The recipe comes from the famous Baghdadi 9th-century singer Ishaq bin ibrahim al-Mawsili.It involves a rich chicken stew (al-Warraq, chapter 72).


Whereas the name rishta is still in circulation today, itriya fell out of use, and it is unsettled as to what it means, although it seems to have had a remarkably long history in the Middle East and the southern and eastern Mediterranean regions. According to 11th-century Arab scholar al-Biruni, itriya was called itreen in Latin and Syriac. From non-Arab sources we know that before the Latin itria was mentioned in Galen (second century AD), it was itrion in Greek.

It seems to me that the location where it was most widely used is the key to its meaning. The Jerusalem Talmud, which dates back to 5th-century AD, mentions “a kind of pasta known as itrium was common in Palestine from the 3rd to 5th centuries” (Silvano Serventi, Pasta, p. 17). As early as the 8th century, the famous Arab linguist al-Khalil bin Ahmed in his dictionary Al-‘Ayn describes itriya (إطرية) as the specialty food of Ahl al-Sham, that is, people of the Levant in the Eastern Mediterranean region. Now, in the medieval lexicon Lisan al-‘Arab (s.v. طرأ) these people were called Turiyoun (طوريون), i.e. from al-Tur (الطور) al-Sham. And hence itriya. 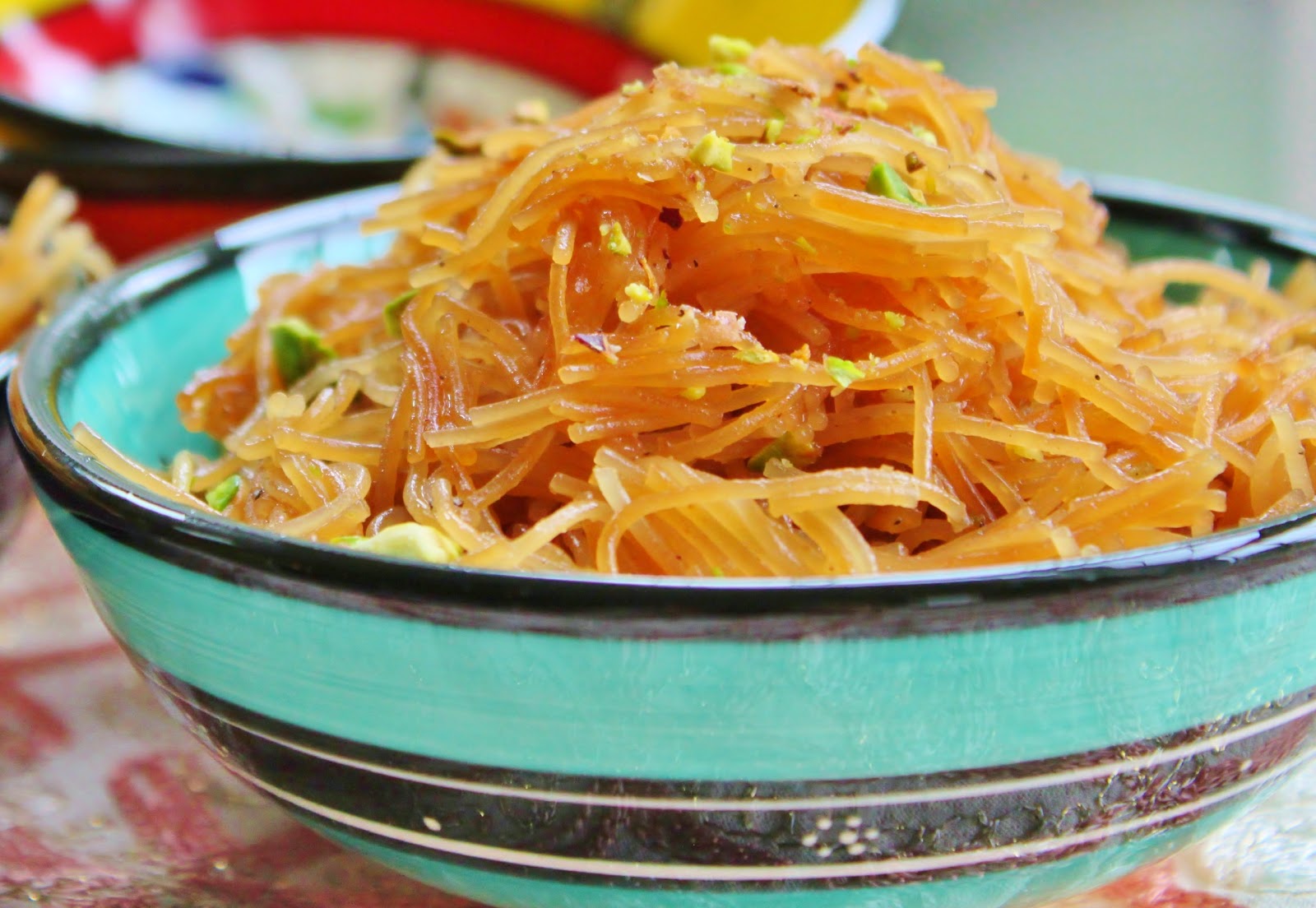 
1. Melt butter with oil in a medium heavy pot. Slightly crush noodle balls between your fingers and add them, stirring constantly until golden brown, about 5 minutes. Carefully pour in hot water, and add salt. Stir, and bring to a quick boil, then lower heat and simmer, covered, until the noodles start to soften, 4 to 5 minutes.

2. Add sugar, cardamom, rose water, and walnut. Stir until sugar crystals dissolve. Let the pot simmer, covered, on medium-low, stirring 2 or 3 times, until moisture is absorbed, noodles look glossy, and sugar starts to stick to the bottom of the pot (12 to 15 minutes).

3. Immediately, spread it on a platter, and give it a generous sprinkle of ground pistachio. Serve it warm. Leftovers may be refrigerated and heated for 30 seconds in the microwave when needed.