The perfect salsa for your grilled dishes: 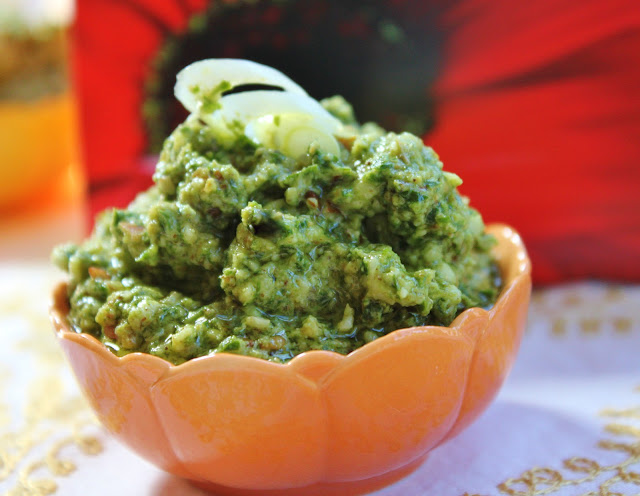 In modern Iraq what first comes to one’s mind at the mention of the words sauce and salsa is a store-bought bottle of steak sauce similar to A1, which we use primarily with hamburger sandwiches. We think of salsa as a loan word and a foreign concept. Other store-bought sauces are more commonly known by their names, such as khardal (yellow mustard sauce), ketchup, and mayonnaise. Homemade dips and sauces are usually given names, such as hummus bi-thina, jajeek (yogurt sauce), etc.

The general consensus nowadays regarding the etymological origin of salsa and sauce is that they have been borrowed into English from Spanish and French, respectively, and that both ultimately come from Latin salsus ‘salted,’ which stems from sal ‘salt,’ which indeed is an important ingredient in making sauce and salsa (see American Heritage Dictionary 4th edition). BUT:

Etymology aside, serving dishes with some sort of sauce, relish, or condiment is an ancient custom going back to the ancient world. In one of the Babylonian recipes preserved on cuneiform tablets written around 1700 BC, there are directions for the cook to send the dish to the table accompanied with “garlic, greens, and vinegar” (Jean Bottéro, Mesopotamian Culinary Texts 12).

Given the high level of sophistication the ancient Mesopotamian cuisine achieved, it is likely that these ingredients were presented in the form of a relish, or what we call today salsa, i.e. chopped and mixed with vinegar. Otherwise, there is no logic in imagining that these ingredients were actually presented to the aristocratic diners in separate containers, so that they munch on whole garlic cloves and vegetables, and sip vinegar from a bowl. In fact, judging from the Akkadian herbal texts and related medicinal practices, such relishes and sauces were indeed meant to function as appetizers and digestives.

Later on, the ancient Greeks and the Romans showed the same tendencies, as exemplified in Apicius, the only cookbook which came down to us from classical antiquity, believed to have been compiled around late 4th or early 5th century AD. The book abounds with sauce recipes called oenogarum. They were served with all kinds of meat and vegetables, such as in the recipe “Herb sauce for fried fish:

Prepare, wash, and fry whatever fish you like. Pound pepper, cumin, coriander seed, laser root [asafetida], oregano, rue, pound again; pour on vinegar, add date, honey, defrutum [reduced grape juice], oil, flavor with liquamen [fermented fish sauce]. Put into a pan, bring it to heat; when it is simmering, pour it over the fried fish, sprinkle with pepper and serve. (Grocock and Grainger, Apicius 301)
Evidently, the tradition of serving meat and vegetable dishes with the suitable dips and sauces continued well into the medieval times. In the Islamic-Arab medieval world, the general Arabic word used designating such condiments was إدام idam and صباغ  sibagh. To my knowledge, the earliest record occurs in the Qur’an (revealed between 610 and 632 AD), where the olive tree is said to provide people with oil used as sibgh (صِبغ) condiment (Al-Mu’minoun, Chapter xxiii: verse 20). Indeed, olive oil along with vinegar was deemed the most basic of all condiments. We still relish a dip of seasoned olive oil with bread, and think of it as being an exclusively Italian simple dip.

Now, we come to the earliest extant Arabic cookbook, which is al-Warraq’s tenth-century Baghdadi cookbook Kitab al-Tabeekh كتاب الطبيخ  . It covers the Abbasid cuisine from late eighth to mid- tenth century. This cookbook contains many recipes for condiments called sibagh (صباغ), which are similar to what we have in Apicius. They are served as dips and sauces with meat, fish, and vegetable dishes, as an aid to digestion, particularly with grilled dishes, as they were thought to be hard to digest. Fish was deemed especially bad for the digestion, due to its cold properties, unless aided with the suitable sibagh.

On a hot summer day, the cook brought us a dish of shabbut (carp) fish, a golden kid-roast resembled.
Masterly roasted; with parsley, leeks, olive oil, and thyme stuffed.
Then its sibagh he made of pomegranate juice, sugar, and almond,
Vinegar, murri, asafetida leaves, black pepper, olive oil, walnut, and coriander.
He brought it in looking like the sun, a radiant delight, redolent with aloe wood, musk, and amber (My translation, in Annals of the Caliphs' Kitchens)

Sibagh was sometimes served as a dip alongside the grilled or fried dishes. It was put in small bowls called sakarij. They were used communally by the eaters, which necessitated that they should stay clean. Diners were strongly cautioned against what today is called double dipping -- dip a morsel into the sibagh bowl, have a bite, and dip it again (as happens in one of Seinfeld's episodes). Such a person back then was disparagingly called القطّاع al-qattaa’ ‘the cutter.’

Etymologically, one of the medieval meanings of sibagh was ‘a dip,’ from the verb sabagha صبغ  'to dip.’ Interestingly, this term was also applied to the Christians’ rite of baptizing children, and explains why John the Baptist, for example, was given the name Yohanna al-Sabbagh يوحنا الصباغ.

It turns out the word ultimately derives from the ancient Mesopotamian language. In the Akkadian dictionary, the verb sapu (variant saba’u) means ‘to soak, drench.’ Interestingly, this also sheds light on the meaning of the name of an ancient religious group that still exists in modern Iraq, the Sabians (الصابئة). In the Iraqi dialect, they are called Subba, followers of John the Baptist, who choose to live close to rivers.

To resume the subject of sauces and dips, as we come to the thirteenth century, we notice some kind of development. In al-Baghdadi’s cookbook Kitab al-Tabeekh, sibagh recipes given were no longer poured all over the cooked meat and vegetables. Instead, they were presented as separate appetizers to be eaten with bread. According to al-Baghdadi, they were given between dishes, to cleanse the palate, sharpen the appetite, and aid digestion.

In the rest of the extant medieval Arabic cookbooks, which belong more or less to the same era as that of al-Baghdadi's, such as the Aleppan Al-Wusla ila ’l-Habeeb الوصلة الى الحبيب by the Syrian historian Ibn al-‘Adeem and the Egyptian Kanz al-Fawa’id كنز الفوائد, we come across condiments known by the name صُلص/ صلوصات suls/ sulusat (singular صَلص sals).

From the many recipes given in these books, we realize we are dealing with condiments — in content and function — similar to those of sibagh. However, from the sulusat recipes we infer that the dips and sauces started to be made smoother and uniform in consistency. The ingredients were pounded in a mortar until they resembled marham (ointment), as one of the recipes specified. The cook was also instructed to adjust the liquid added until the mixture attains قوام الصلص qiwam al-sals (sauce consistency), which I take to be neither runny nor too thick, the eater should be able to pick up some of the sauce with a piece of bread. Some of the sauces were meant for immediate use, such as the one prepared by mixing yogurt with pounded garlic and mint. Others were sealed in containers for up to a month. In one of the recipes, the prepared sauce was kept in one-time-use bottles because the sauce would mold after the bottle was opened. Here is its recipe from the Egyptian cookbook Kanz al-Fawa’id, recipe no. 491, called sals Kamili (صلص كاملي), most probably after the Ayyubid King al-Malik al-Kamil, who ruled 1218 to 1238:

Recipe for Sals Kamili:
Take the very tender leaves from the tips of citron stems (qulub al-utrunj), soak them in fine-tasting water, and then [drain them and] take one part, and pound them in jurn al-fuqqa’i. Take a similar amount, by weight, of chervil (baqdunis), and another similar amount of rayhan turunji (lemon balm). Pound them in the same manner, and mix them all; sprinkle on them crushed Andarani salt (rock salt), and squeeze in what is needed of lime juice.

Empty the sauce into glass bottles, and seal their surfaces with sweet olive oil. In each bottle, there should be an amount enough for a single table. Before serving the sauce, [a mix of] galangal, ginger, cloves, and black pepper—all crushed, are sprinkled on it to give it a delicious flavor. Some people choose to use it without adding these spices (My translation).

It is still unresolved whether the suls dipping condiments were indigenous to the Middle Eastern region, etymologically and in substance, or whether they were an imported concept during the time of the Crusades. However, I venture here to side with the former. The condiment in all its varieties has a long established history in the region. Besides, the name, after all, might not necessarily have been Latin in origin (from salsus and sal). In the major medieval Arabic dictionaries, salas (pl. suls) is descriptive of the consistency of ‘soft mud,’ which indeed is applicable to the consistency of the sauces, described above.

Clearly, the history of salsa needs to be revised in light of what is being discovered of the medieval Arab cuisine. Meanwhile here is a simple medieval recipe to enjoy for a condiment, usually served with grilled meat, from al-Baghdadi’s thirteenth-century cookbook كتاب الطبيخ Kitab al-Tabeekh. It is called Khal wa Khardal (vinegar and mustard): 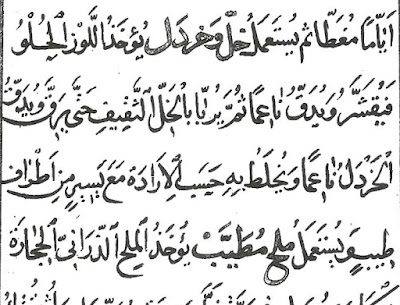 Mustard and Vinegar Sauce
(Khal wa Khardal)
خل وخردل
This is my adaptation of this recipe:

Delicious with all kinds of grilled meat. 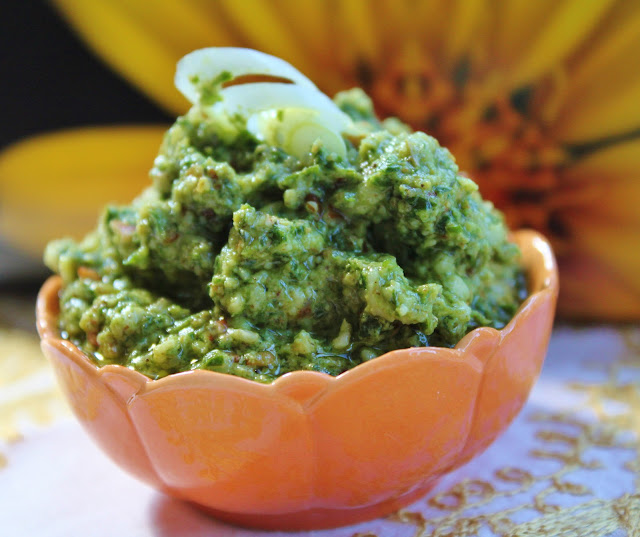 Posted by Nawal Nasrallah at 11:52 AM No comments: