Gift of the Marshes in  Southern Iraq,

and the Joyous Festival of Baghdadi Jews

The Iraqi scholar Abbas Baghdadi wrote a very interesting book, titled بغداد في العشرينات (Baghdad in the 1920's, published 1999). It is a rare memoir packed with vivid vignettes of Baghdad during that period. One thing caught my attention in particular: In his description of street foods, he mentions in passing that among the foods that Baghdadi Jewish vendors used to sell was khirret (خرّيط). He describes it as dried yellow clay with no distinctive taste or smell. He says it is extracted from roots of reeds, and it is an exclusively Jewish food. In his chapter on feasts, he further mentions that one of the sweets Baghdadi Jews used to eat on the joyous festival of Purim in March was khirret. He says they called this festival عيد المجلي ('Id il-Mjalli 'Megillah'), which they rhymed with طاب القعود بالمحلّي (tab il-qu'ud bilimhalli), that is, it is so pleasant to sit outside the house -- now that winter has ended.

Now, I come from a Muslim family, originally from Basra, and I remember having crunched on chalky clumps of khirret several times as a snack food. It was light-mustard in color and faintly sweet, but addictive. None of my school friends in Baghdad knew of it, and when I told them about it, they got a kick out of its name. They though it was funny.  Besides, I was never aware of this Jewish connection. In fact, until I came across this mention of khirret in Abbas al-Baghdadi's book, I used to think it was another name for carob (kharnoub خرنوب/ kharroub خرّوب).


Intrigued, I launched a search, which led me to Dr. Suzie Alwash, director of 'Eden Again Project', who helped me identify this mystery food. It turns out that khirret is none other than the yellow pollen of the famous wild aquatic plant bardi بردي (Typha spp), which has been growing in the southern marshes of Iraq (al-Ahwar) ever since time immemorial. It is said that in ancient Sumerian it was known as ariptu (اربتو) [I have not been able to verify this].
Bardi (Typha, also known as cattail, and reedmace) is a tall erect plant with lance-shaped leaves. The male and female flowers grow on the same stalk. The tiny fluffy male flowers are clustered in narrow cylindrical-shaped spike. They develop right above the female densely clustered spike, which looks like a hot dog. 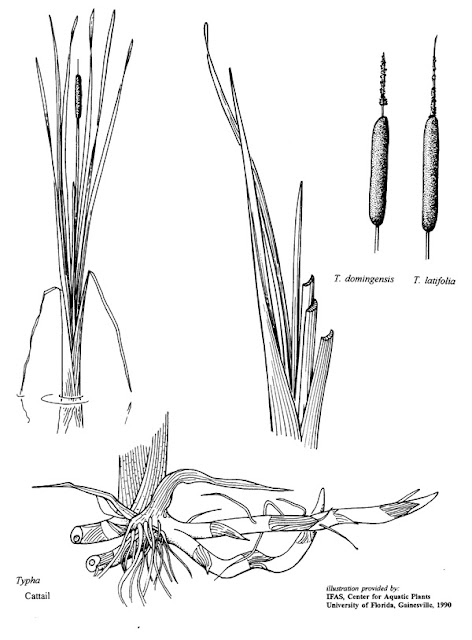 During the pollinating season in early summer, the male spikes look golden yellow and are loaded with pollen. After they have given off their pollen, the flowers fall off, leaving behind a bare spike. 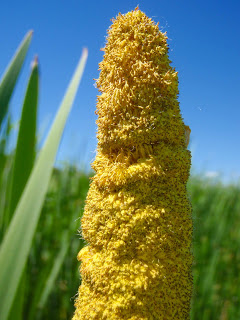 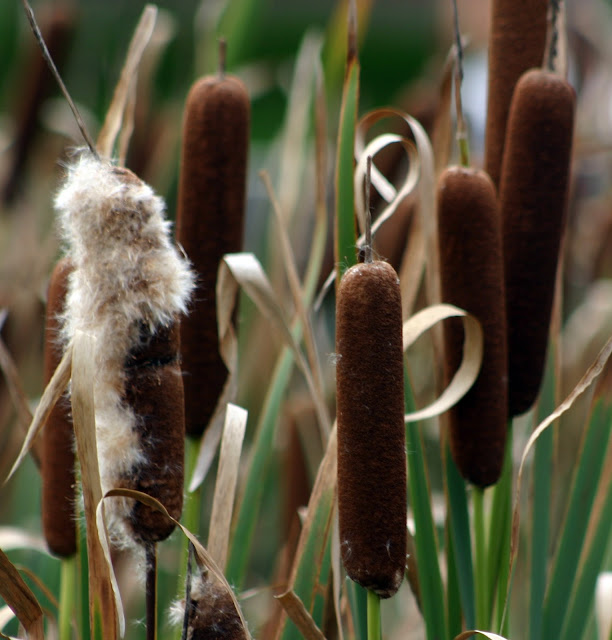 To the marsh people of Iraq, this plant is God-sent. The rhizomes make a source of nutritious starch; the bases of the leaves are eaten raw or cooked, the young flower spikes are cut off and eaten, and in springtime (April/May), the yellow pollen is collected and made into khirret. And it is the way this pollen is harvested that initially gave it  the name khirret (the stripped): The male spike is grasped firmly between the thumb and the forefinger, and it is firmly stripped into collecting sacks.

In the southern marshes, this job of collecting pollen is usually allotted to women and kids. The harvested stuff is spread on a mat in a sunny place to allow it to dry out. After that, they sift it to get rid of all non-pollen material. The resulting yellow powder is mixed with sugar and then steam-cooked: A big pot is half-filled with water, and when it boils, a large piece of cloth is spread on the top of the pot, the pollen with the sugar is spread on this cloth. To prevent steam from escaping, the entire rim of the pot is sealed with mud. The pollen is covered with another piece of cloth, and left to steam-cook until it clumps into a cake-like mass. This mass is usually broken into pieces, and stored or sold in the market places of the neighboring towns and cities.

Here is a You Tube link, in which a marsh kid demonstrates how to steam khirret.


Sometimes, date syrup is added to replace sugar, which gives it a darker hue, and this must have been the sweetener originally used ever since ancient times before the advent of sugar.

Khirret sold in the marketplaces looks like irregular pieces of yellow brick or rocks, but brittle  to the bite.     The marsh people like to call it chuklet il-ahwar جكليت الاهوار (marsh taffy).

Khirret is a nutritious food high in protein, and its medicinal benefits are believed to be many. People eat it to relieve indigestion. It is said to be good for the colon and respiratory tract. It is used to cleanse the urinary system and stop diarrhea. The raw pollen is put on wounds to heal them. It is also popular among women during the early stages of pregnancy. Moreover, it come in very handy for bee-keepers, who use it to feed their bees.

To be sure, typha grows in other wetlands and marshes of the world, such as in China, where it is medicinally used more or less the same way the Iraqi marsh people use it, or in the United States, where eating Typha was part of the native American culture. However, I believe that the sweetened khirret candy, as described above, is the specialty of the marsh people of southern Iraq.

Now as to why this khirret candy was especially valued by Jewish Iraqis, as noted by Abbas al-Baghdadi above, here is what I think happened:

Baby Moses was found in a basket among the Egyptian Papyrus plant (Cyperus papyrus), and like the Typha in southern Iraq, they were called bardi in Arabic. The bardi in a sense was Moses’ savior. When the captive Jews settled in ancient Babylon, they eyed the region’s bardi with the same reverence, and the pollen candy khirret must have developed a religious significance in Judaism in Iraq ever since ancient times, especially during the happy spring festivals of life and salvation; that is up until the mid-20th century when there still was a thriving community in Iraq. Yellow in Judaism was a symbol of ripeness, freshness, happiness, gold and royalty, and the yellow khirret surely matched the fun spirit of the Purim holiday.

Through correspondence with the Israeli scholar Dr. Susan Weingarten, I learnt that Jewish Iraqis never took the khirret tradition with them to Israel. The new generation growing up there never had the chance to experience it first hand. To them it is just a faint memory. They told her that their parents talk about it, and they describe it as looking like a stone when held in hand, and that they used to eat it around springtime. She speculates that it is quite likely that the yellow coconut sweets they make for Purim in Israel must have been  a substitute for the hard-to-find original yellow khirret.

Posted by Nawal Nasrallah at 6:06 PM