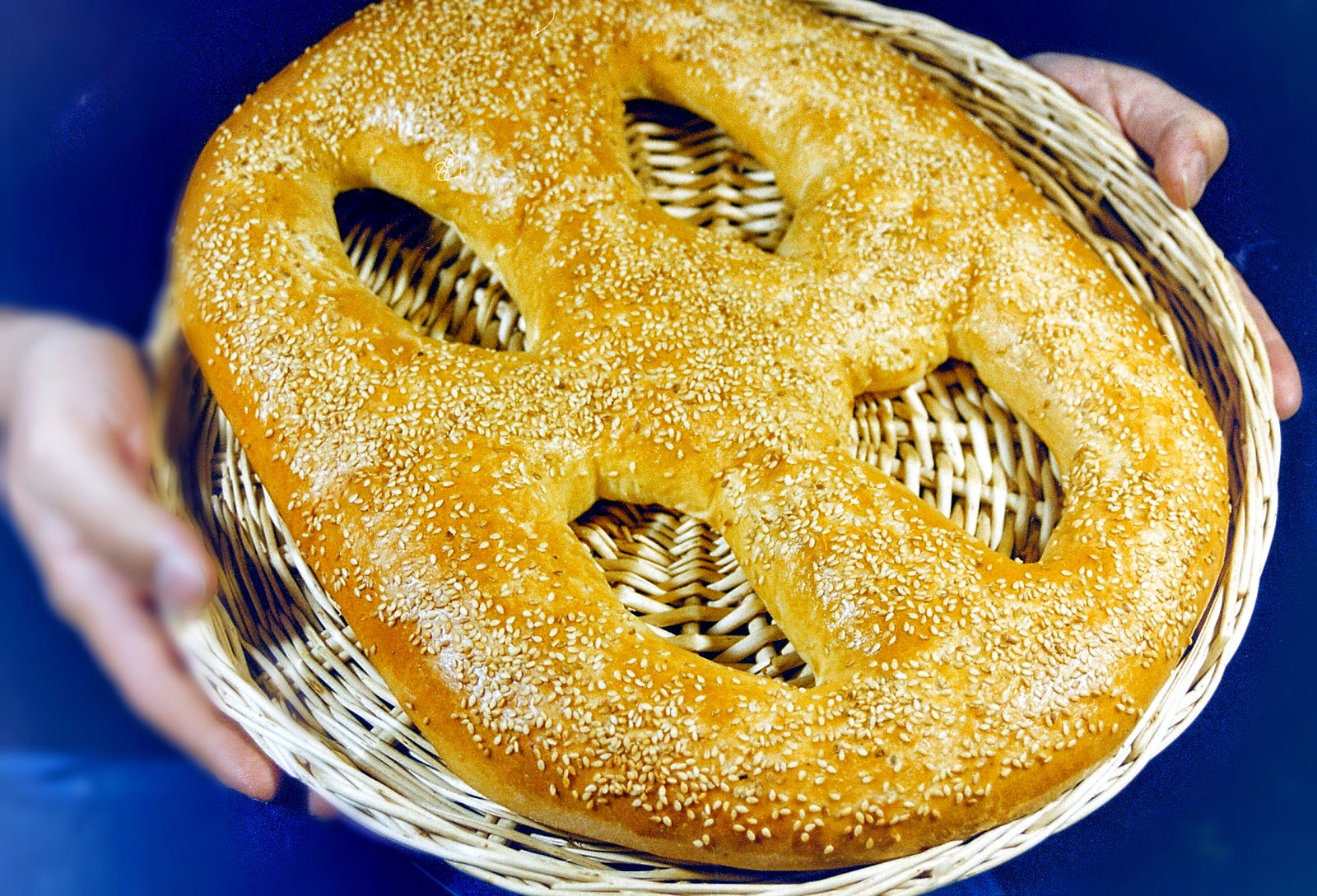 Iraqi Churek is most traditionally shaped like a wheel, about 12 inch across with a cross-like double axis; but it is also made into smaller flattish oval-shaped buns with no holes in them, stuffed with small amounts of dates or cheese and parsley.

Churek, along with the dry dunking cookies ka'ak كعك and bakhsam بخصم, are usually purchased from traditional specialized bakeries where sometimes churek can be seen hung on the wall on long nails for display. The oldest and most famous churek and ka'ak bakery is Ka'ak il-Seyyid كعك السيد, located on the main street of Baghdad, Shari' al-Rasheed. It was a family-run business, which started in 1906.

In Iraq today churek is not particularly associated with any festivities, religious or otherwise. It is consumed year round, usually with afternoon tea. But churek is also known in other countries, where it is traditionally associated with Easter. In Greece and Cyprus, for instance, it is known as tsoureki, but it is shaped into braids. The Armenian variant is choreg and the Turkish is çöregi. Interestingly, its counterpart in traditional Eastern European Easter baking is the kulich/kolach. The Bulgarians, for instance, call it kolach, but they more traditionally shape it like a ring or a wheel, which is more like our chureck without the cross. The name is claimed to be of Slavic origin, closely connected with the bread’s round shape --kolo means ‘circle’.

Now, the Jewish challah (variants: chalah, hallah, cholla) is said to have affinities with kulich. For the Sabbath, this yeast bread is usually made braided. However, for Rosh Hashana (Jewish New Year), it is made round, to symbolize the yearly cycle and the wheel of time, which, etymologically, is in perfect agreement with one of the possible meanings of challah, Which is 'round'.

It seems to me, therefore, that the etymological key to churek is its shape -- round. Going back to medieval Islam, jarq was a kind of bread shaped into rings. The name was undoubtedly the Arabized form of the Persian jarg ‘circle,’ from which charka ‘wheel’ was derived (today in Iraq, charikh is 'wheel').

Ultimately, however, this pastry with all these etymological variants associated with it may be traced back to the ancient Mesopotamian New Year festivities of the Akkadian mythical goddess Ishtar (Sumerian Inana ‘Lady of Heaven’).

She was the most important goddess, daughter of the moon god Sin, and sister of the sun god Shamash. She was goddess of love, war, sexuality, and fertility in humankind. Interestingly, she was also described as goddess of the grains, which explains why women kneaded dough to make cakes to her. Her planet was Venus, she was called the Morning and Evening star, and her name was often strongly associated with the moon. Besides, due to her journey to the underworld to bring back her shepherd-husband Dumuzi (biblical Tammuz), she was also responsible for the mysteries of death and rebirth.

Ishtar's spring festivals celebrated the return of life, announced by the first New Moon of the season, around the end of March and beginning of April. In celebration of the goddess Ishtar and the New Year, special pastries were baked as offerings to her. Of these temple pastries, we are fortunate to have specific descriptions of round pastries called qullupu. The name is suggestive of their shape -- round, which used to symbolize Ishtar and her associations with the moon, as well as the circle and the wheel, which signified the cycle of the year and renewal of life. The term was derived from the Semitic roots kll and kly meaning ‘to complete’, and kull, ‘whole.’

Thus, we can clearly see affinities -- in etymology and shape -- between the ancient Mesopotamian qullupu pastries and the modern East European pastries kulich/kolach/challah and their counterpart tsoureki/choreg/çöregi, and the Iraqi chureck.

Ishtar’s fame spread far and wide. She had her Phoenician, Syrian, and Canaanite counterparts, and consequently most of the rituals and ceremonies involved in worshipping her were adopted and adapted, one way or another, in most parts of the ancient Old World. In the Bible, Ishtar was called Ashtoreth, and it is conjectured that the name of Esther, heroine of the Book of Esther, is a Hebrew rendition of a form of Ishtar.


Likewise, the name of the Christian feast ‘Easter’ is ultimately associated with the goddess Ishtar. Today, Easter, falling on the first Sunday after the first full moon following March 20 celebrates the resurrection of Christ, just as Ishtar’s festivals, falling on the first evening of the first crescent moon following the Spring Equinox, marked the New Year by commemorating the resurrection of the god Dumuzi, Ishtar’s husband.

It has also been suggested that the crucifixion cross symbol in the ‘bouns’ (buns) of the ancient Saxon Feast of Eostre -- origin of the modern British hot cross buns -- harkens back to the ancient Mesopotamian cross, believed to symbolize the sun or the four quarters of the moon, one of Ishtar’s symbols. 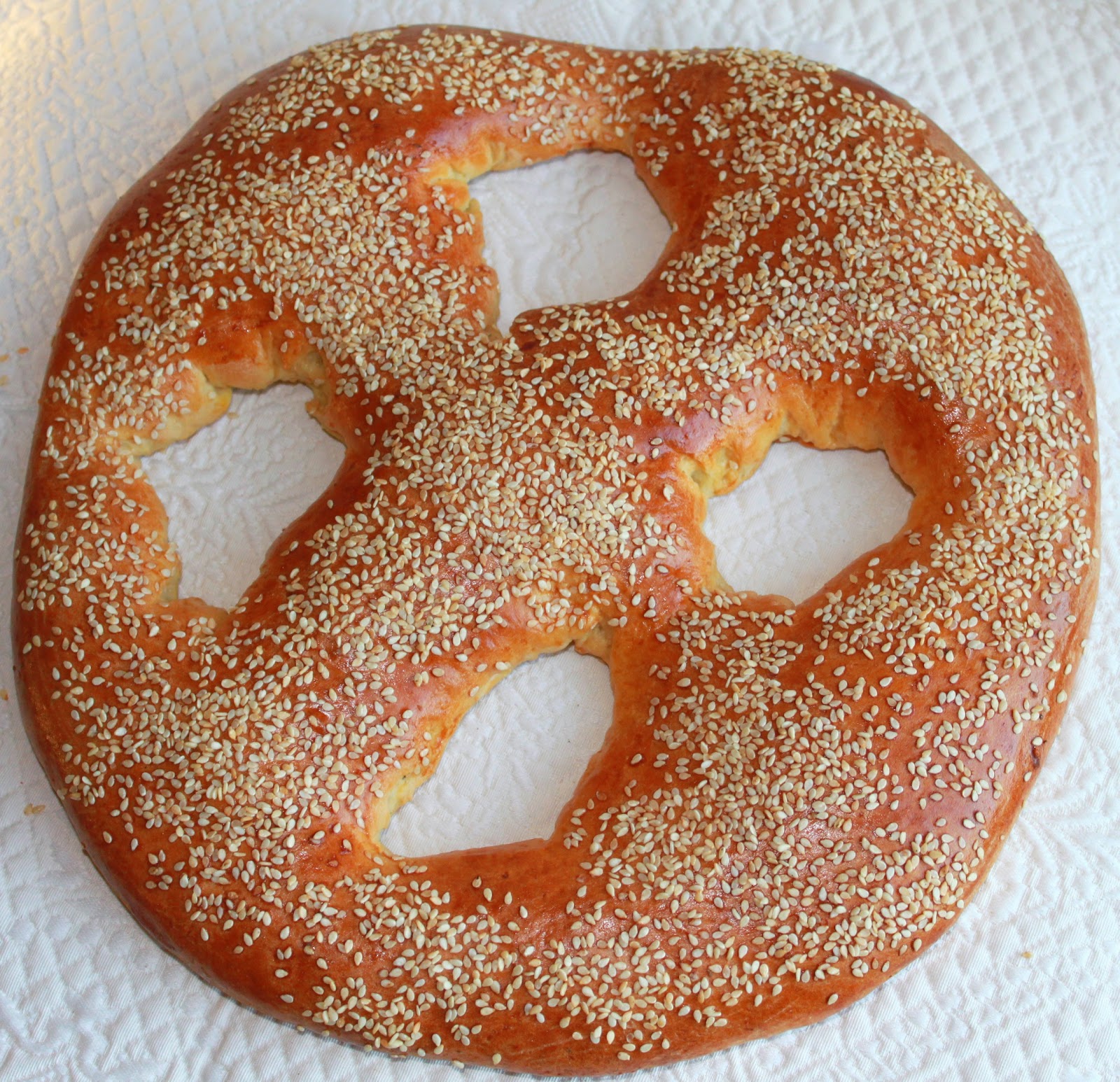 I have a very good detailed recipe for making churek in my Delights from the Garden of Eden, (pp. 107-8). Or follow this link for one of my reader's adaptation of my original recipe.

The traditional shape of the churek with four holes has also inspired the romantic name shibbach il-habyib (lovers' window). 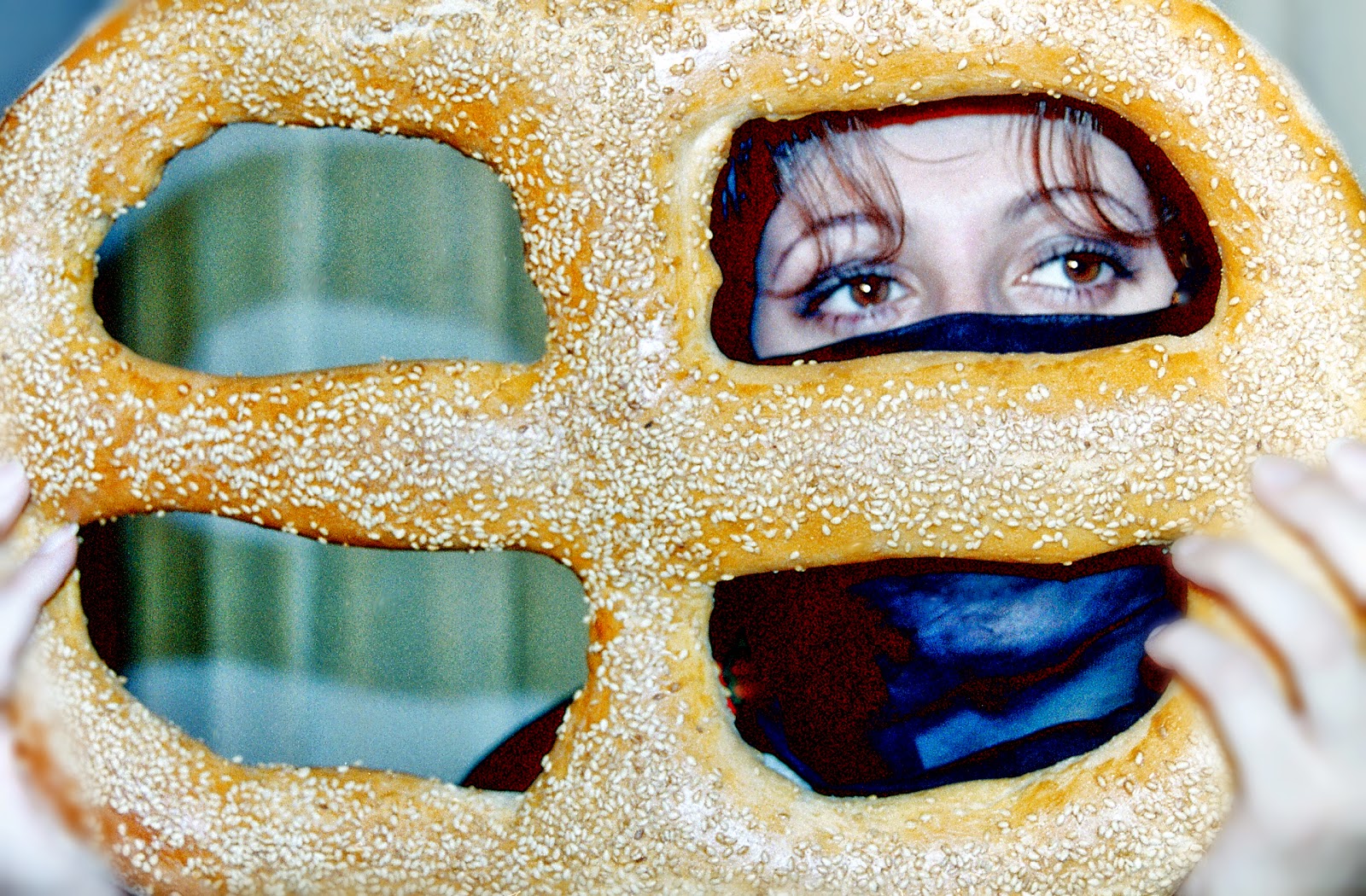 Whether a 'steering wheel' or a 'lovers' window' they all end up being devoured as quickly as you make them. But since my recipe yields four large ones, I usually keep some in plastic bags in the refrigerator for 3 or 4 days, and heat them up as needed, and freeze a couple for later. Just let them cool down completely, stuff them carefully in large plastic bags and freeze them. Next time you need to serve them, take them out of the freezer about an hour ahead of time, and then heat them up in the oven, medium heat, for 5 minutes or so. They will taste as if you've just baked them.
Posted by Nawal Nasrallah at 10:02 AM