In just 30 minutes, you can have a feast, one that is truly delicious, satisfying and healthy. 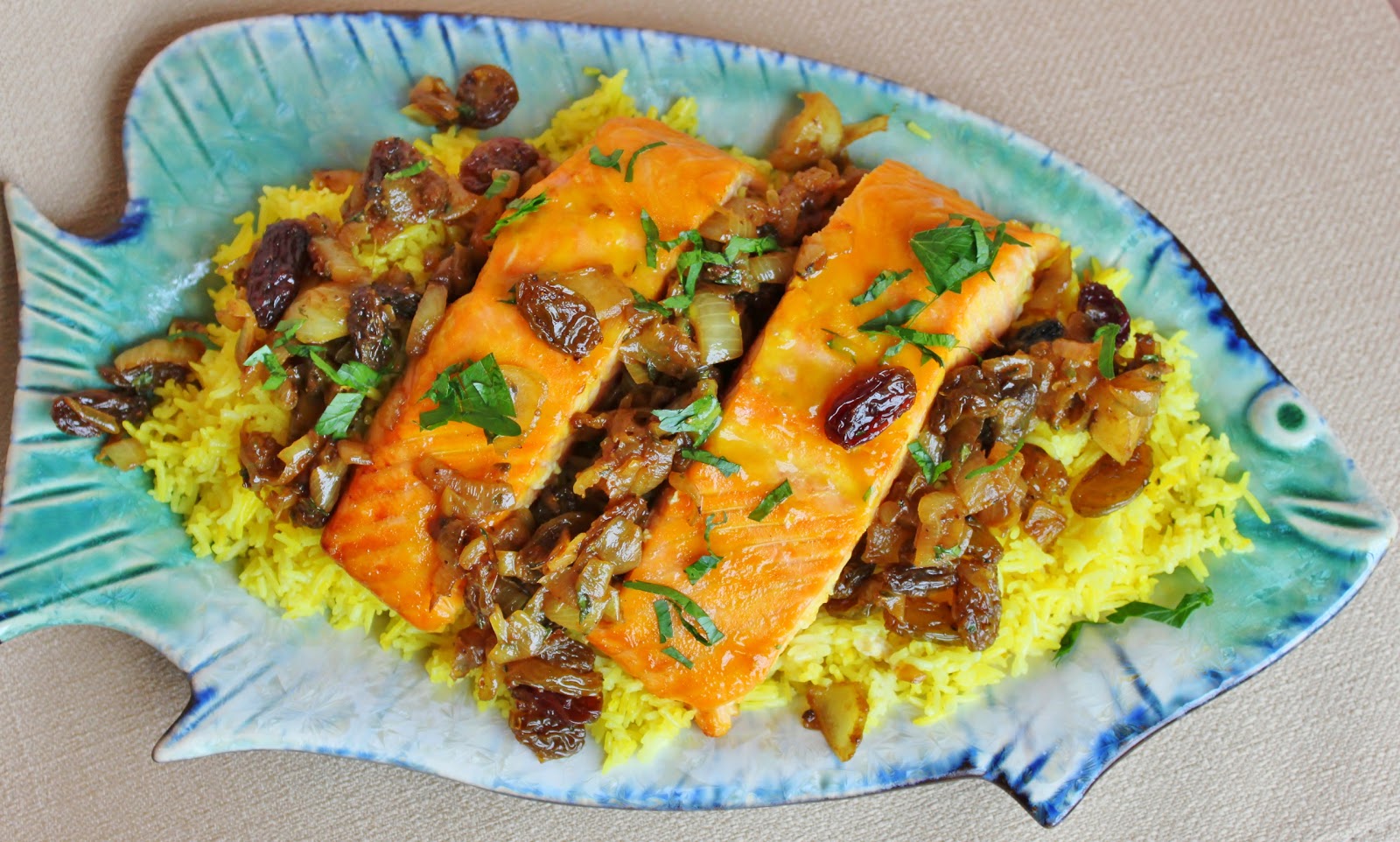 Traditionally, the fish is layered with the rice and raisin mix, and hence the name mtabbag simach (layered fish dish). I make it simpler by just arranging the fish pieces and the raisins on the rice itself. To make it lighter, I broil the fish instead of frying it.Start by cooking the rice, and in the meantime prepare the raisin mix. Ten minutes before serving the dish, start broiling the fish, and there you have it!

A Bit of History:

During the Sumerian times in ancient Iraq, fish was an important source of food, and fishing was considered a respectable profession. In their records, there were freshwater fishermen and saltwater fishermen. Different methods for catching fish were mentioned, such as using harpoons, nets, and wires.


Fish was consumed fresh and smoked. The roes were preserved separately and eaten as a delicacy. They were the caviar of the Sumerians. From fish they made the fermented sauce 'siqqu' for both kitchen and table use, similar to the oriental fish sauce.

By the third millennium BC, full use was made of fish. It was salted and dried, a method that is still in use nowadays in the marshes of the south. The marsh dwellers nowadays call it gbab (apparently derived from Arabic verb qabba ‘dry out’). They de-salt it and cook it with rice, in a dish they call masmouta.

Existing ancient Sumerian artifacts show fishermen carrying big fishes, as in this detail from the Standard of Ur, where the fishes are threaded through their gills. interestingly, Iraqi fishermen today still carry fish in a similar manner.

Allusions to fish were made in the Sumerian hymns and incantations. A hymn in praise of the goddess Ishtar of Uruk associates the goddess with fish. It joyfully credits her for prosperity and plenitude. Thanks to her the channels were filled with fish. Another hymn describes a festival in honor of Ishtar: the table was laden with butter, milk, dates, cheese, and seven fishes.

Interestingly, during the second half of the reign of Hammurabi (second millennium BC), mention of fish noticeably decreased in texts, and the word ‘fishermen’ was synonymous with ‘lawless people.’ One of the reasons could be that people escaping justice at the time used to find refuge in the southern marshes, the homeland of fishermen. This was by no means an indication that people stopped consuming fish. The Greek historian Herodotus (d. 425 BC), for instance, in the account of his visit to Babylon (I: 200) mentions that there were tribes in Babylonia who ate nothing but fish.

Fish from the river Tigris was highly valued by the medieval Baghdadis because they believed that the best fish came from running cold-water sources, with stony riverbeds. Euphrates followed in excellence. Top quality fishes were shabbout (Barbus grypus) of the carp family. Al-Biruni (d. 1048) says its name in Syriac is shabbuta شبّوطا and shibuta شيبوطا (Kitab-al-Saydana 396). Next in excellence comes bunni (Barbus sharpeyi), and zajr (anthopeterus), a large fish with small scales, now called dhikar. All these varieties are still swimming in the Tigris and Euphrates, albeit in much smaller numbers.


Medieval Verses on Fish by Kushajim

Here are verses on fish composed by the famous Abbasid gourmet poet Kushajim (d. c. 961), as depicted in al-Warraq’s 10th-century cookbook (Kitab al-Tabeekh, Chapter 11, my translation in Annals of the Caliphs' Kitchens, pp. 113-14):

What a glorious river, over-brimming, bountiful, submerging, sweet, and flowing
Teeming with the choicest fish, zajr, shabbut, and bunni,
Like fresh dates of orchards or lusciously contoured arms of beauties.

The preferred medieval method for cooking the fish was frying. They believed it was easier on the digestion, and helped alleviate its harmful effects. Fried fish was prepared by sprinkling it with flour and salt and frying it in sesame oil. Sour based sauces and dips called sibagh صباغ were always offered with fish dishes to further aid the digestion. Vinegar was the basic ingredient used in most of these sauces to which might be added garlic, onion, mint, parsley, mustard, caraway, thyme, raisins, walnuts, almonds coriander, pomegranate seeds, or sumac.

A specialty of the Abbasid Prince Ibrahim bin al-Mahdi (d. 839), half brother of Harun al-Rasheed,  was to put a huge live fish in a basin filled with juice of red grapes and leave it there until it drinks as much as possible of the juice. The fish was then cleaned and roasted, and served with sauce (sibagh) made with wine vinegar, parsley, mint, and caraway.

Fish tongues were a treat. Hundreds of them would be cooked as qarees (fish aspic). Another recipe prides itself on baking a fish, which results in a roasted head, poached middle, and fried tail. The recipe ends thus: For each part, prepare a sauce that goes with it, so that nobody would suspect that the whole fish was actually cooked as one piece, God willing (al-Warraq, Chapter 33).

There is the huge ‘monster of Tigris,’ the bizz (Barbus esotinus), which is sometimes called ‘Tobias’ fish’ in English. It is usually sold in pieces.

These are all delicious white-flesh river fishes, except for one thing: their tiny thorny bones. One has to be very careful eating them, that is why they are better eaten with the fingers rather than utensils. This seems to have been a concern since ancient times. Here is an ancient Sumerian proverb, which incidentally sheds light on this issue:

My husband heaps up (grain) for me,
my son metes it out for me--
Would that my darling husband would pick the bones from the fish (for me).
The speaker is a  woman who had it all, but still pines for the times when her husband used to do those personal, caring, little things for her like picking the fish bones for her before eating it. Nowadays, such a woman might win our sympathy, but the Sumerians meant this to be a sarcastic comment on unreasonable selfishness.

One of the most popular ways for preparing fish in Baghdad is by grilling it as masgouf, a method, which in all probability goes back to the times of ancient Mesopotamia. It is usually prepared by professional fishermen along the bank of the river Tigris.


When prepared at home,fish is traditionally served fried, stewed, and baked in the domed clay oven tannour or the oven, seasoned with tamarind or pomegranate molasses, and served with bread and/or rice (plain white, yellow, or brown with cinnamon). However, yellow rice is the most popular, it looks pretty, quite aromatic, and what's more, it is easier to see the tiny white bones with it. I prefer to cook this dish with the boneless salmon (Heaven!), but feel free to substitute with whatever fish you fancy.
Here is how to cook it: (Makes 6 servings)
For the rice:

3 tablespoons oil (such as canola)
½ teaspoon turmeric
2 cups rice, if aged variety is used, such as basmati, it needs to be washed and soaked for at least 30 minutes, and then drained and used
3½ cups water
1½ teaspoons salt
4 cardamoms pods, keep whole
1 cinnamon, 1-inch stick

1.To make the rice: In a medium heavy pot (preferably non-stick), put all the rice ingredients, and let them boil, covered, for 7 to 10 minutes on high heat, until all visible moisture evaporates. Reduce heat to low and let it simmer for 20 minutes. Fold rice gently 2 to 3 times while simmering to allow it to fluff.

2. To prepare the raisin mix: In a medium skillet, sauté onion in oil until translucent, about 5 minutes. Stir in turmeric and curry powder in the last 30 seconds. Add the rest of the raisin-mix ingredients, and stir and cook for about five minutes. Keep warm.

3.Now the fish: turn on heat of the broiler. Line a shallow baking pan with aluminum foil, and drizzle it with half tablespoon of oil. Arrange the fish pieces on the pan leaving space between pieces. Brush them with half the mustard and half the honey, drizzle with the remaining oil, and sprinkle with salt.

Broil the fish for 5 minutes, then turn over the pieces, brush them with the remaining mustard and honey, and let them cook until surface is crisp and golden, about 5 minutes, or until flesh is flaky when poked with a fork. Immediately, spread the rice in a big platter, arrange the fish pieces on the rice, and spread the raisin-mix between and around the fish pieces. 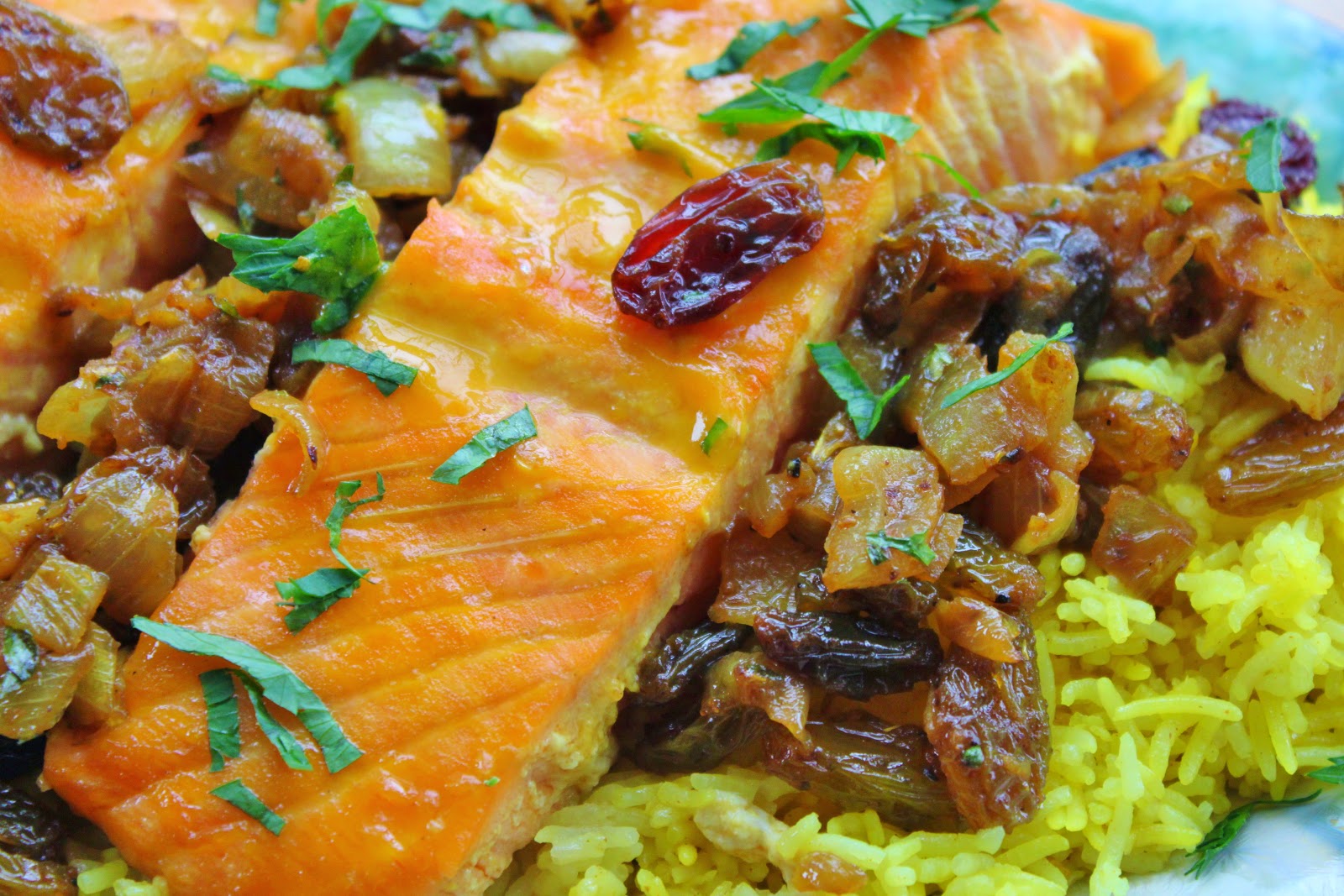 Posted by Nawal Nasrallah at 7:56 PM